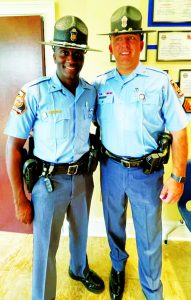 A large crowd was on hand Friday morning in Hazlehurst for the official opening and ribbon cutting ceremony for the new Hazlehurst Georgia State Patrol Post on the Baxley Highway. SFC Eric Wilkes, commander of the Hazlehurst Post, served as Master of Ceremonies for the event, which featured the official raising of the U.S. Flag over the post, an address by Georgia Commissioner of Public Safety Col. Chris Wright and the ribbon cutting ceremony. The event was culminated with a group photo of city and county officials, public safety personnel, and local law enforcement agencies (above) and a public tour of the new facility.