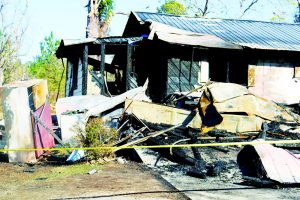 A late night house fire claimed the lives of two Hallspur Road residents last Wednesday.
The bodies were found in the rubble after firefighters got control of the blaze.
Hazlehurst-Jeff Davis County Fire Chief Charles Wasdin said firefighters arrived on the scene to find the entire back part of the home in flames. There was heavy fire damage in the garage area and the kitchen area at the rear of the house, where the victims were found.
Firefighters remained on the scene until Thursday morning extinguishing hot spots in the ashes.
Wasdin said the State Fire Marshall’s office has taken over the investigation of the blaze.
The home was the residence of Manson Phillips and his daughter Shaundra but Jeff Davis Coroner Tommy Carter said Tuesday that a positive identification of the two bodies has not yet been determined