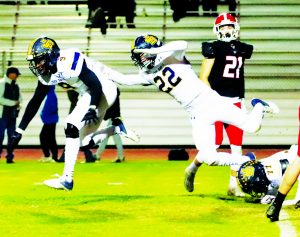 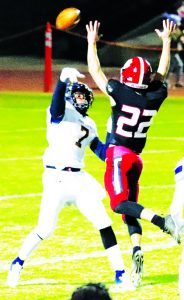 C.J. Parker gets off a pass 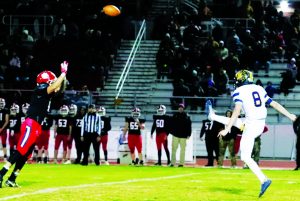 Kade Harpe punts the ball away 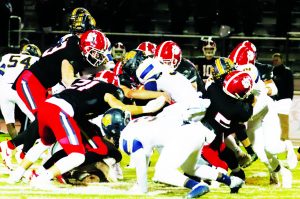 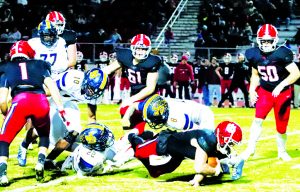 JD defense brings down a Wildcat 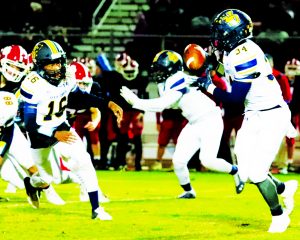 The only other team considered the best is Thomasville, which will meet Rabun County this Friday in the semifinals of the State Tournament.
Jeff Davis High’s heralded defense was no match for Wildcat quarterback Gunner Stockton and his 21 fellow seniors as Rabun scored more points in the first quarter (21) than any Yellow Jacket opponent had scored in a complete game (15). By game’s end, Rabun had 56 points on the scoreboard, more than the Yellow Jackets had allowed all season long (54).
But as good as the offense was, the defense may have been better as the Wildcat defenders stymied the Jackets’ ground-oriented, ball control offense.
The result was a stunning 56-7 Rabun County victory, upping the Wildcats’ record to 11-1 while the Yellow Jackets fell to 10-2.
The Wildcats took the opening kickoff and quickly raced 58 yards in six plays. Stockton was 3-for-4 passing and ran twice for 15 yards including the 12-yd. scoring run. With 10:23 left in the first quarter, Rabun led 7-0.
The Jackets got only four yards on their first possession and punted the ball away.
On the Wildcats’ second possession, Stockton ran for nine yards then threw to a receiver in the flats who raced 66 yards to paydirt. The play should have been called back as Rabun had two ineligible receivers downfield, both of whom threw blocks that sprung the receiver free …. one of the blocks itself should have nullified the play as the Wildcat tackle blocked the Jackets’ Cade Harpe squarely in the back.
But with 7:23 left in the opening quarter, Rabun led 14-0.
Michael Dotson made an excellent return on the ensuing kickoff, returning the ball to midfield. But three illegal procedure penalties and three rushes for four yards left the Jackets facing 4th-and-20 and Harpe punted the ball away.
Also during that possession, on the Jackets’ fourth offensive play of the game, the Jackets’ hard-hitting fullback Kiyon Dotson went to the sidelines with an injury and never returned to the field. While Tre Chandler filled in admirably for the injured Dotson, Kiyon’s running and blocking were sorely missed.
The Jacket defense stopped a run for no gain and, after a long completion, held the Wildcats to a 3rd-and-10. But a pass picked up nine yards and, on 4th down, Stockton picked up the first down, then got eight more and then ran for the final 10 yards and Rabun led 21-0 with less than half a minute left in the first quarter.
After the kickoff, the JD offense went backwards with runs losing yardage and a 15-yd. walk-off on a pass left Jeff Davis with a 3rd-and-30 at the 15. On an attempted reverse, the handoff was missed and Rabun pounced on the fumble at the Jacket three.
The Jacket defense stiffened as Stockton was stopped for a yard loss, threw incomplete into the end zone and then was stopped for a 1-yd. gain to make it 4th-and-goal at the three. Stockton then retreated to pass, found no one open and scrambled into the end zone as the score went to 28-0 with just under 10 minutes left in the half.
After the kickoff, the Jackets had to punt the ball away on 4th-and-2 at the 28.
A 68-yd. Stockton pass after the punt put the Wildcats up 35-0.
On the first play after the kickoff, the Jacket offensive line opened a hold for Aahiyus Allen who rolled 41 yards to the Wildcat 30 and the Jackets had their initial first down of the game with 6:48 left in the first half.
But two plays later, the Wildcats picked off a pass near the goal line and returned it to the 11.
Eight Stockton passes and a Stockton run covered the distance with Rabun scoring on a 7-yd. pass, making the halftime score 42-0.
On the second play after the kickoff, C.J. Parker broke through on a beautiful run for 25 yards but a 5-yd. penalty moved the ball back to the 38. Chandler got four and Allen six for another first down. But the first half ended with Rabun up 42-0.
Despite the huge lead, Rabun tried an onside kick on the second half kickoff. The Jackets recovered but the Wildcats recovered a fumble in the backfield on the first play.
Four plays later, Rabun led 49-0.
On their next possession, Rabun started at their 31. On 3rd-and-2, despite leading 49-0, the Wildcat coaching staff wanted to run up the score. A trick play caught the Jacket defense off guard and a Rabun back picked up 13 but he fumbled the ball and the Jackets recovered at their 42.
On the first play after the turnover, Chandler burst through a hole in the middle of the line and raced 35 yards to the Rabun 23. Allen picked up five, and an incomplete pass ended the third quarter. Michael Dotson bulled his way for a tough two yards and, on 4th-and-3, Allen was stopped for no gain and the Wildcats took over at the Rabun 16.
Determined to run up the score, Rabun stayed with Stockton and its passing game, going 84 yards in just three plays to make it 46-0.
After the kickoff, Michael Dotson got outside around the left end for 25 yards but a flag backed up the ball 10 yards to the Rabun 48. Chandler took the ball up the middle for 22 yards to the 26. After an incomplete pass and two running plays, Jeff Davis faced 4th-and-2 at the 18. Chandler took the ball up the middle for 11 yards to the seven, and Alls threw to Parker over the middle for a touchdown. Angel Mendez kicked the extra point to make it 56-7.
On their final possession, Stockton finally left the field and the subs played out the game.