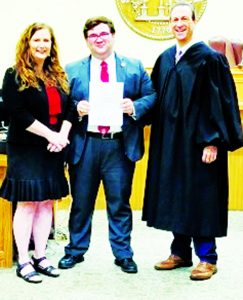 Keith Higgins, District Attorney for the Brunswick Judicial Circuit (BJC), announce that a new Assistant District Attorney (ADA) will be working in his Appling County office.
Hunter Glenn Smith, a native of Wayne County and former law clerk in the Appling County DA’s office, has recently passed the Georgia Bar and was sworn in as an ADA Oct. 27 by Superior Court Judge Stephen D. Kelley at the Wayne County Courthouse.
Smith is the eldest son of Tanya and the late Christopher Smith. His maternal grandparents, Glenn and the late Linda Clark, and paternal grandparents, Randy and Susan Smith, are all from Jesup.
Smith grew up in Wayne County and graduated from Wayne County High School in 2014. He attended the University of Georgia and graduated summa cum laude in 2018 with a Bachelor’s degree in Political Science with minors in Student Affairs and Sociology, as well as certificates in Applied Politics/Public Affairs and Leadership. Smith continued his education at the University of Georgia School of Law, where he graduated magna cum laude in May 2021.
While in law school, Smith had the opportunity to serve in the Jesup Public Defender’s Office, the Carl Vinson Institute of Government, the Georgia Supreme Court, the Georgia Governor’s Office, and the Athens-Clark County District Attorney’s Office. He was also a member of the Prosecutorial Justice Program and was named the Outstanding Prosecutorial Student for the Class of 2021.
Higgins, who began his term as District Attorney for the Brunswick Judicial Circuit Jan. 1, said the promotion of Smith as an ADA will help the Appling office continue to provide competent and professional service in the pursuit of justice for the citizens of both Appling and Jeff Davis counties.
“We are all very proud of Hunter, who is already a vital member of our Appling office; to have him now assume the duties of an Assistant District Attorney will only further benefit the citizens of Appling and Jeff Davis, and the entire Brunswick Judicial Circuit,” said Higgins.
For more information about career and volunteer opportunities with the D.A.’s Office, contact Barbara Baucum at 912-554-7200 or bjcinfo@pacga.org.