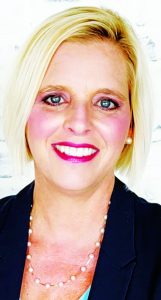 Laura Bloom has been named the new CEO of the Joint Development Authority and the Hazlehurst-Jeff Davis County Chamber of Commerce.
Bloom, the wife of Jeff Davis Hospital CEO Barry Bloom, began her career shortly after graduation from Georgia State University with a Master of Science degree in Organizational Behavior. She has served as a human resources manager in healthcare and manufacturing for the last 25 years. Her focus is on meeting the needs of the business while taking care of employees. In these roles, she has also been responsible for community partnerships and the reputation of the business as an employer of choice in the community.
Laura shares, “I grew up in Barnesville and went to college in Milledgeville at Georgia College before finishing my formal education in Atlanta. Upon graduation, I began Human Resources life in a manufacturing facility in middle Georgia. After moving to Douglas, I joined the Human Resources team at Coffee Regional Medical Center to serve the 850 employees as a recruiter and later as the Director of Human Resources. While everyone working in healthcare is working to serve the patients, my role was to take care of our healthcare team.”
“In 2015, I was diagnosed with an illness that required I take time off from my career,” she continued. “I had always served in volunteer roles in the community. During this time, I was fortunate to help establish a group of community leaders from public and private organizations who focused on the effects of homelessness on our entire community. I became interested in community development and the powerful accomplishments that could take place as we worked on a common goal.
“At the end of 2015, I joined the leadership team at Premium Waters as the Human Resources Manager. Premium Waters is a mid-sized manufacturing facility producing private-label bottled water. My role was to serve as coach, motivator and care-giver for 115 team members.
“I am married to Barry Bloom who works at Jeff Davis Hospital. We share five children and eight grandchildren. Our three oldest children, spouses and grandchildren live near Perry. Our youngest daughter and fiancé live in Eugene, Ore. Our youngest son attends Jeff Davis Middle School.
“We bought a beautiful historic Hazlehurst home in May of last year and moved in last fall. We attend Hazlehurst United Methodist Church whose members have made us feel at home. I told Barry after we got settled into our home that I pray we get to live our lives out here. I can’t imagine a nicer place to grow old together!
“I am excited to join our business community in a role with both the Development Authority and Chamber of Commerce.”