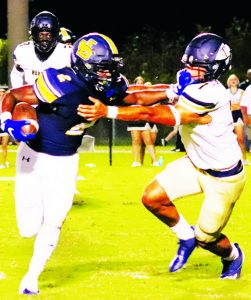 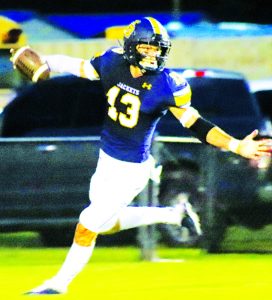 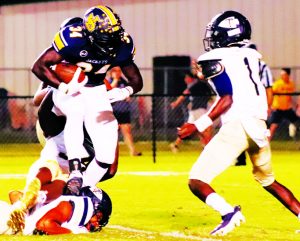 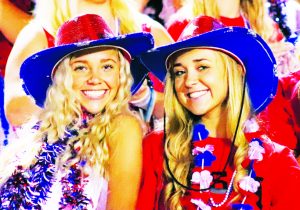 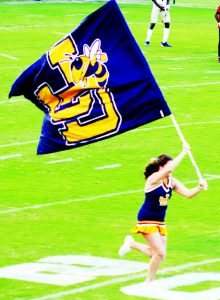 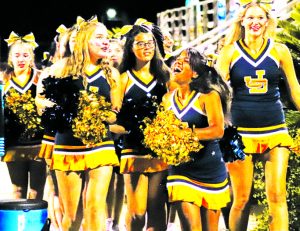 Friday night’s Jeff Davis-Tattnall County football game marked the first time this season the Yellow Jackets have not scored on their opening possession. It appeared to be an omen of what was to come.
In their worst offensive performance of the season, Jeff Davis took a narrow, 14-7 victory over Tattnall County, improving the Jackets’ record to 4-0 and dropping the Warriors, who opened the season with a 41-6 win over Claxton, to 1-1.
In this week’s Homecoming Game. the Yellow Jackets host 2-2 Long County. The Blue Tide has victories over Bacon County (44-29) and Butler (46-0) and fell to Berrien County (34-6) and Charlton County (40-0).
After taking the opening kickoff, the JD offense started well with 9- and 10-yd. runs by Landon Roberson and Kirese Hunt, a 6-yd. pass completion from Tyson Alls to C.J. Parker, a 9-yd. Roberson run and a 6-yd. run by Parker.
But with a 1st-and-10 at the Tattnall 35, things got tougher. Four running plays fell inches short of 10 yards and the Warriors took over on downs.
The Jacket defense held on their first series on the field but an encroachment penalty on the Warrior’s punt gave Tattnall new life. Three plays later, Tattnall had to punt again and the Jackets took over at their own 27.
It took them nine plays to go 73 yards to get on the scoreboard. Roberson started things with three carries for a first down at the 40. Alls then connected with Parker for 12 yards into Tattnall territory. After Terrance Clemons got six, and Tre Chandler three, Hunt broke free off a block from Dalton Sellers and raced 18 yards to the Tattnall 17. Two plays later, on the first play of the second quarter, Peyton Laney broke off a block from Matthew Glass for a 20-yd. TD jaunt. Angel Mendez kicked the extra point and the Jackets led 7-0.
Parker intercepted a Warrior pass to stop Tattnall’s next possession.
Penalties and a big loss on a fumble thwarted the Jackets’ next offensive try and they had to punt the ball away.
Tattnall then put together its first drive of the game, moving from their own 29 to the Jacket 25 in nine plays. The drive was marred by a series of penalties and overcame a big play by Sellers who nailed a runner for a 4-yd. loss. Finally, on 4th-and-11, the Warriors lined up to try a 47-yd. field goal. But the Jackets’ Amarion Mitchell bulled through the middle of the line to partially block the kick and the Jackets went to the dressing room at halftime with a 7-0 lead.
On the second half kickoff, Tattnall fumbled the ball and the Jackets were in business dee in Warrior territory. But the Jackets couldn’t capitalize on the good field position as the Warriors recovered a JD fumble inside the 10 yard line.
The Jackets’ next possession was marred by penalty flags but they managed to march 62 yards for a score. A 15-yd. flag on the Warriors after an Alls-to-Aahiyus Allen pass for four yards moved the ball quickly the Tattnall 44.
After Allen got four, the Jacket offense got back-to-back 5-yd. walk-offs and they faced 2nd-and-16 at midfield. Alls then retreated to pass, found no one open and scrambled 23 yards for a first down at the Warrior 27. Kiyon Dotson then rambled 12 yards, running over a Warrior defender, to the 15. Two plays later, the Jacket front wall opened up a huge hold and Dotson raced 12 yards untouched into the end zone. Mendez made it 14-0.
On the first play after the kickoff, Laney came in to make a great defensive effort to throw a Warrior runner for a loss. But a flag gave the Warriors a first down at the Jacket 39. Tattnall made it to the 32 when the flags started flying again. This time against the Warriors. Back-to-back 15-yd. walk-offs forced Tattnall to punt the ball away.
On their last possession of the game, the Warriors finally got on the scoreboard thanks to an elusive, scrambling quarterback who frustrated the Jackets’ defensive efforts by turning what seemed sure losses into gains. The Tattnall touchdown came on a scramble by the quarterback and the P.A.T. kick cut the Jacket lead to 14-7.
The Jackets then ran the clock out to preserve their win. 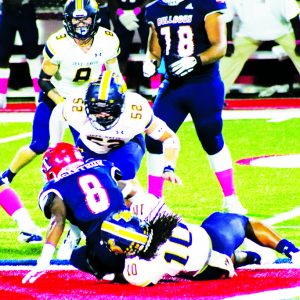 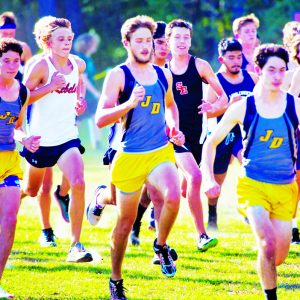 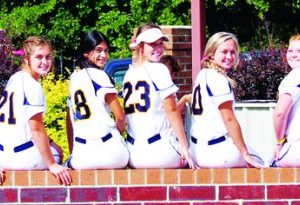 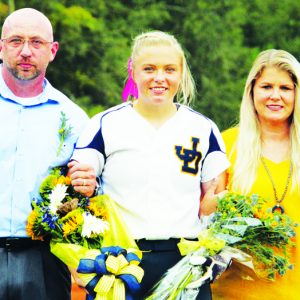