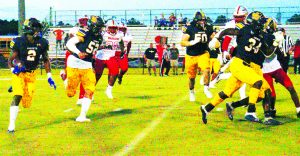 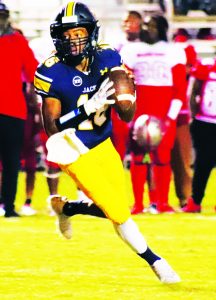 Tyson Alls rolls out to pass 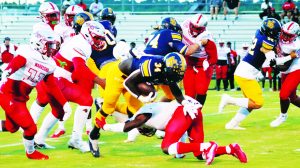 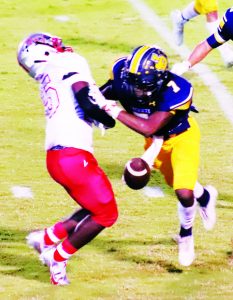 CJ Parker knocks the ball loose from a Warrior receiver 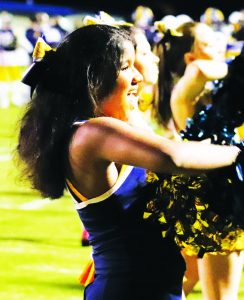 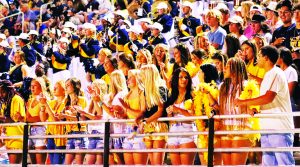 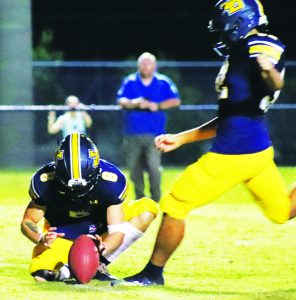 Savannah’s Jenkins High School invaded The Pinelands Friday night fresh off a 55-0 season-opening victory over Groves. But after claiming a 7-6 first quarter lead over the Jackets, the Warriors were manhandled by Jeff Davis the remainder of the game as JD took their 2021 home opener 39-7.
The Jackets looked good on both sides of the ball as the offense scored almost at will and the defense frustrated the Warriors with a series of 3-and-outs for most of the game.
The game got off to a good start for the Jackets as Angel Mendez’s pooch kickoff wasn’t fielded and Kyrese Hunt hustled downfield to recover the loose ball and Jeff Davis was in business at the Warrior 36.
It took six plays to put the ball in the end zone with Kiyon Dotson scoring from three yards out. The big play in the drive was a 19-yd. scamper by quarterback Tyson Alls who rolled out to pass, found an opening and scrambled from the 25 to the six.
The P.A.T. kick hit the cross bar and the score remained 6-0.
After a 3-and-out, the Jackets started their second possession at their own 36.
On the first play, Hunt, Dotson, C.J. Parker, Matthew Glass, Dalton Sellers, and Jacob Strom wiped out the entire left side of the Jenkins defense and Aahiyus Allen, playing in his first game of the season, darted untouched all the way to the Warrior 36 before being run out of bounds. But a holding penalty, a quarterback sack and an interception gave Jenkins the ball on the JD 49.
After a Kirk Clifton sack for a 3-yd. loss, an incomplete pass and a 6-yd. run, the Warriors faced a 4th-and-8 and went for it, picking up 34 yards to the JD 6. Two plays later a 5-yd. pass put Jenkins on the board and the extra point gave the visitors a 7-6 lead.
The second quarter started with an 11-yd. Allen run, followed by Dotson runs of 8 and 37 yards, the latter going up the middle through a huge hole carved out by the offensive line. Two plays later, it was time for the offense to wipe out the left side of Jenkins’ defense again and Allen trotted in for a 12-yd. TD. The Jackets went for two but came up short and the score remained 12-7.
Following the kickoff, Jenkins started retreating. A holding penalty, a 3-yd. loss and a 13-yd. loss on a high snap left the Warriors facing 4th-and-a-mile at their own 7 and they had to punt out of their end zone. Kade Harpe fielded the punt at the Jenkins 32 and returned it to the 21 to set up the Jackets’ next score.
After a penalty backed up the Jackets to the 33, it took them five rushes to get in the end zone. Hunt picked up 14 on two carries, Allen got 21 in two tries and Landon Roberson scored on a 2-yd. run. After a penalty put the Jackets five yards further away, Mendez kicked the extra point to make it 19-7.
Jenkins’ next possession was thwarted when Carter Mullis flushed the quarterback out of the pocket and Clifton nailed him for a sack and Jenkins had to punt. The short punt gave Jeff Davis the ball at the Warrior 42.
On the first play, William Cravey threw the key block as Parker broke loose for a 28-yd. pickup to the 14. Two plays later, Allen followed the blocks of Sellers and Nate Lewis to score from 16 yards out. Mendez made it 26-7.
After the kickoff, Jenkins got its second first down of the game but then Parker knocked the ball loose from a receiver on a pass play, Parte scooped up the loose pigskin and returned it to the Jenkins 49.
The half ended with Jeff Davis on top 26-7.
Tre Chandler returned the second half kickoff all the way to the Jenkins 49. On the first play, the offensive line opened a huge hole for Dotson and he rambled all the way to the Jenkins three. But a holding penalty and a couple of rushes for no gain left JD facing a 4th-and-goal at the 10. Mendez tried a 27-yd. field goal but it missed the mark.
The Jackets began their next possession at the Warrior 42. A 29-yd., tackle-breaking Allen run set up the next score. Alls retreated to pass, found no one open and scrambled 12 yards for the score. Mendez hit the point after to make it 33-7.
After another 3-and-out, the Jackets started their next possession in Warrior territory again.
It took the Jackets five plays to light up the scoreboard again, this time on an 18-yd. run up the middle by Dotson as the Jacket offensive line just blew the weary Warriors away. A fumbled snap foiled the P.A.T. but Jeff Davis led 39-7.
The Jacket coaching staff emptied their bench in the latter stages of the game and Jenkins got one of its few first downs of the game on a 52-yd. run to the Jacket 3. But the defense stiffened and on 4th-and-goal the Warriors tried a field goal which Lewis blocked.