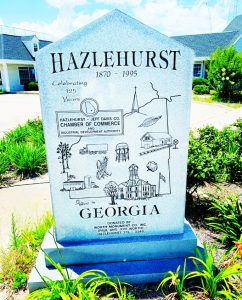 Hazlehurst’s mural on the west side of the Fales Furniture building between Hinson and Railroad streets has certainly brightened up the downtown area. The site was chosen because events like the Halloween Boo Bash and Christmas Hometown are held in that area – and the heartbeat for our next big event, the South Georgia Food and Wine Festival in September. The mural was fully funded by arts grants. The artist is Lee Mobley from Douglas. [It actually is the second downtown mural. The first, designed by former Jeff Davis Middle School art teacher Candy Allen in 1994, is on the north side of the former Lowery’s Western Auto store building and is now covered by vinyl siding. A granite marker with the mural’s likeness is situated at the corner of Tallahassee and South Railroad streets. See accompanying photo.]