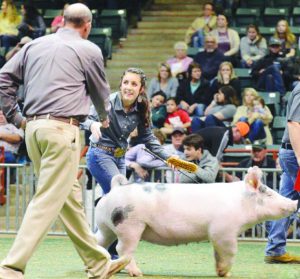 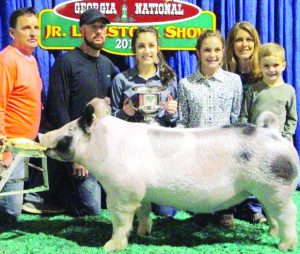 “Glitz and Glam, Let’s Show Some Ham” was the title for a Cloverleaf DPA speech for 5th grade 4-H member, Chanleigh Underwood in 2014. She presented the project in Pork Production where she placed 1st.
Chanleigh was new to the presentation side of 4-H, but she was no stranger to opportunities 4-H had to offer in the livestock program. Chanleigh has been showing pigs with Jeff Davis County 4-H since she was four years old in the pre-club 4-H Livestock program. Starting at an early age has peaked her interest in the pork project and has served her well in the last eight years at the Georgia Junior National Livestock Show in Perry.
In the 5th grade, when she presented her speech about showing pigs, Chanleigh used first-hand knowledge and brought it to life for those in the pork project. She has carried this knowledge and love for the program on to achieve high status among 4-H members statewide.
Master 4-H Status is the highest achievement a 4-H member can earn by winning in a project area at the state level. Underwood won the Georgia Junior National Market Gilt Show for the first time in 2013 as a 4th grader with her pig Tootsie, earning her first Master Status. In 2014, there was repeat in the hog barn when Chanleigh and her pig Angel took home the honors of Grand Champion Market Gilt earning her a second Master 4-H’er Status as a 5th grader. She has also placed in the top five, four of the eight years she has competed.
The Georgia National Junior Livestock Show was held in Perry Feb. 20-23. Chanleigh and her gilt, Thunder, brought home top honors from the state as Overall Grand Champion Market Gilt. This win once again, earns Master 4-H status for Underwood.
A three time Master 4-H Member is no small feat. Many 4-H’ers compete all through high school in numerous projects and never achieve the honor, and she now holds three titles.
Chanleigh devotes many hours to the training, working and caring for her show pigs. While others in the community are involved in sports, showing and raising show pigs is Chanleigh’s sport. She works after school every day, on weekends and holidays, rain, shine, hot or cold, to earn these high honors.
In addition to winning overall Grand Champion Gilt, Chanleigh was the 1st place winner for 10th grade showmanship. Her dedication to the project prevailed for her once again as she brought home top awards in the prestigious event. This show has become the largest youth livestock show east of the Mississippi River with over 2,000 animals exhibited.
Chanleigh’s love for her show pigs has become a way of life for her and her family. Currently, she works with her dad to breed and raise show pigs at their family barn. She has been raising pigs of her own for two years. When farrowing season begins in mid to late July, Chanleigh is on watch for newborn pigs. She spends long, hot hours in the farrowing barns monitoring the safe delivery of newborn pigs. These pigs are later sold to other youth exhibitors for show pigs.
This past year, she raised six litters and at the 2019 State Show, one of the pigs she raised was selected as a Division Champion. Chanleigh will use this gilt in the coming year to raise more pigs for her operation.
Chanleigh said the best thing about showing pigs for her has been the people she has met and the friends she has made over the years. Her favorite 4-H activity is definitely showing livestock and she said she would never choose anything over showing her pigs.
When asked how she would promote the show pig industry or encourage others to show, Underwood says, “To me it’s fun! I love the task of gaining the pig’s trust and then teaching them to walk proud. Yes, walk proud may sound silly, but the pig has to learn to trust you……My pigs are my teammates and it’s so rewarding.”
4-H and the livestock program has had an impact on Underwood since she began showing pigs as a young girl. Chanleigh has gained confidence showing pigs and she says, “I was a shy little girl who would hide behind my parents. My first year showing, I cried before entering the ring at every show, but my parents pushed me because I loved the pigs so much at home. Then one day it just clicked and when I stepped into the show ring nothing mattered but doing my best.”
Consistent devotion to her dreams has kept Underwood pressing forward to reach her goals… she says, “When I was seven I began showing pigs for Zack Bridges and I still do to this day.”
Chanleigh has a love for animals, especially pigs, and plans to continue to show pigs throughout high school. After high school, she plans to attend the University of Georgia to become a pharmacist and continue to raise livestock.
Chanleigh is the 16-year-old daughter of Chad and Autumn Underwood and attends Jeff Davis High School. She is an advocate for the livestock industry, and the 4-H program and understands the importance of agriculture to the community and state. Chanleigh also understands the importance of raising healthy animals and has devoted herself to the task. While others are chasing their dreams along other avenues, you can find her chasing hers in the barn. Jeff Davis County 4-H wishes her the best as she continues to strive to “Make the Best Better.”
For more information about UGA Extension/4-H or showing livestock contact us at 912-375-6648.