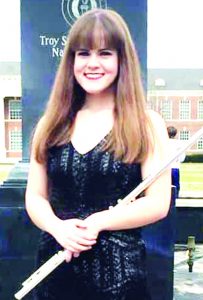 While attending the SEUS Honor Band Clinic at Troy University this past weekend, Shelby Kerns placed first in a solo competition. She was a finalist among three other students who had submitted a recording several weeks prior to this event. Because of her magnificent performance, Shelby was able to perform a solo with Troy piano professor, Dr. Hui-Ting Yang, at the honor band concert Saturday and received a standing ovation from the audience. She has received several scholarships from Troy University already and will receive another for her solo music performance. The Jeff Davis High School band congratulates and wishes Shelby only the best as she pursues her Music Education degree at Troy University in the Fall.