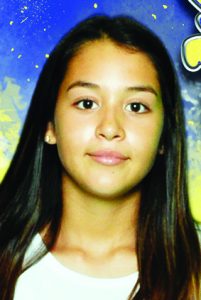 A Jeff Davis High School student was killed Sunday night in a two-vehicle accident in Laurens County.
According to news reports, Jessica Jasmin Andrade, 15, a sophomore at JDHS and a first-year member of the Lady Jacket cross country team, was thrown from the vehicle and died at the scene, Laurens County Coroner Richard Stanley said.
Three other children under age 17 also were ejected from the family’s 2005 Lincoln Aviator, Georgia State Patrol Trooper Charles Hardy said.
The other children also were hurt, including another teen who was seriously injured and taken to Medical Center, Navicent Health, in Macon.
At about 7 p.m. Sunday, Andrade’s family was headed west on Holiday Road and the driver of the Aviator failed to stop at the stop sign at Scotland Road, Hardy said.
The Aviator crossed into the path of a southbound 2015 Ford F-150 out of Florida carrying four people, who suffered minor injuries.
The pickup hit the Lincoln on the passenger side.
The Georgia State Patrol’s Specialized Collision Reconstruction Team is investigating the crash.