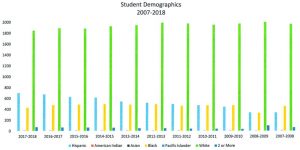 The student demographics in the Jeff Davis County School System have been changing substantially over the past 11 years, particularly through the increase in Hispanic population in the county. That’s what School Superintendent Dr. Stan Rentz told the Board of Education at Monday’s September Board meeting as he shared a bar graph of the student population.
In the 2007-2008 school year, there were a little over 1,800 white students, just over 400 black students and just over 300 Hispanic students who comprised the vast majority of the student population.
By the 2011-2012 school year, the number of Hispanic students had surpassed the number of black students.
And in the latest demographic, for the 2017-2018 school year, there were a little over 1,800 white students, just over 400 black students and the Hispanic students had more than doubled in 11 years, climbing to about 700.
That trend is verified by the latest U.S. Census Bureau statistics, which reveal that, in 2017, an estimated 11.9% of the population in Jeff Davis County was Hispanic or Latino. The 2010 census had that figure at 10.47% and the 2000 census counted 5.13% as Hispanic or Latino.
Monday’s meeting began a little late as a pre-meeting work session lasted longer than expected.
In the work session, the board talked with contractor Kelvin Manning about the best way to proceed with building additional tennis courts.
Dr. Rentz recognized middle school teacher Shelly McBride and high school accountant Myra Rentz for monthly employee awards.
The board heard from Finance Director Betty Corbitt, who went over a number of financial items with the board.
After a closed session, the board accepted the resignation of transportation employee Wilbur Miller, approved an out-of-state trip to Jacksonville, Fla., for Pre-K Special Education Teacher Kaitlyn Spell
The board discussed but took no action on upcoming training opportunities for board members.