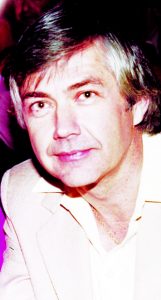 Dr. Sidney Phillip Johnson, 86, of Hazlehurst, passed away peacefully Aug. 20 at his home.
Known to many people as “Doc,” he was born Feb. 2, 1936, in Butts County to Spencer and Lucile Johnson, their only child.
Doc was preceded in death by his parents; his grandson, Nathan Fleming of Arlington, Va.; and Honey, his cherished dachshund of more than 20 years. He is survived by his daughter, Michele Fleming of Arlington; his son, Sidney “Sid” Johnson of Hazlehurst; and grandson, Spencer Fleming, also of Arlington.
Doc (“Daddy Sid” to his grandsons) grew up in the Butts County community of Indian Springs, near Jackson, and graduated from Jackson High School. While Doc always had his heart toward medicine, before he went to medical school, he went into the Air Force and worked at the National Security Agency as a cryptographer deciphering Russian fighter codes. In 1956, he entered the University of Georgia, earning his Bachelor of Science degree before enrolling in the Medical College of Georgia (MCG) in Augusta. He was a huge Dawgs fan and ecstatic that the Dawgs and the Braves won it all in 2021-22!
After graduating from MCG in 1965, he worked multiple jobs in Macon and Augusta, including at hospital blood banks, emergency rooms, and he did psychiatric assessments for prominent doctors. He finally landed in Hazlehurst thanks to Benjamin Goldman, another of the town’s beloved family physicians. In 1966, Doc bought Goldman’s Hospital and worked in the same office building until his retirement in December, 2018. He spent more than five decades treating the sick, healing the wounded, and delivering thousands of babies from Jeff Davis, Appling, Telfair, and other surrounding counties.
Sidney was a country doctor in the truest sense, making house calls and providing top-notch medical care to many people at a fraction of the cost because he had such a warm, kind, and giving heart. He even saw patients at all hours of the night, because it was better for them. He also brought two teenage boys from a poor family in Indian Springs, treated them as his own, and helped them overcome the struggles of poverty and attain their own education and independence. Doc loved to tell stories and crack jokes and was beloved and respected by all his patients and many friends. Whether rich, poor, Black, White, Hispanic, or white or blue collar, everyone adored and admired Doc. He was a great listener and was always available to help people going through their own struggles.
Sidney could also be quite stubborn and very strong-willed, which helped him to stay positive as he faced the difficult challenge of living with a debilitating disease during the last 5+ years of his life. Despite his physical hardships and loss of independence, he continued to make his caregivers and nurses laugh. The disease took away his ability to walk and be the hyper-active person and sports enthusiast that was central to his identity. From the time he was a kid, he loved all sports, including shooting, swimming, biking, and playing pool. Later in life, he took up tennis, skiing, and canoeing, and he liked to brag that he could outclass people half his age. He also learned to fly and was an outstanding pilot, frequently flying Michele and Sid to far-away destinations, including the Bahamas and Colorado.
Most of all, “Daddy Sid” loved and adored his children and grandsons Nathan and Spencer. He lived to travel to Arlington and could not wait for the boys’ annual summer vacations to Hazlehurst. Sidney had a passion for learning and spent much of his free time reading medical journals, National Geographic, and anything science-related, especially physics and cosmology. He also did daily crosswords, studied Spanish, and enjoyed fine dining, though he was equally as happy with a fried egg, sausage, or pimento cheese sandwich. He loved traveling and was always up for a new adventure, counting Italy, Portugal, the Bahamas, and Spain among his favorites. Sidney will be dearly missed by everyone who knew him, especially Michele, Spencer and Sid, while he and Nathan are rejoicing in heaven.
A gathering of family and friends will be held at Wainright-Parlor Funeral Home Aug. 26 from 5-8 p.m. A memorial service will take place in the fall.
In lieu of flowers, the family wishes memorial donations be made to Nathan’s Cancer Slayers 2022 in memory and honor of his grandson Nathan, who lost his own courageous battle to cancer shortly after turning 18. Any donation helps support critical research to help kids fight cancer.
(Note: To learn how to get your donation doubled by our sponsor VOLVO, contact Michele at mohunt0907@gmail.com or at 571-243-7165.)