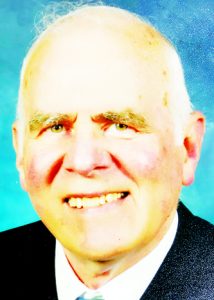 Mr. Mitchell “Mitch” Dale Humphrey, 77 of Hazlehurst, passed away March 4 at his residence after an extended illness.
Born in Harriman, Tenn., on Oct. 25, 1944, he had lived in Hazlehurst for the past 50 years. Mr. Humphrey served in the U.S. Navy from Aug. 14, 1962, – Feb. 24, 1966. After leaving the Navy he continued to serve in the United States Reserves until Aug. 13, 1968. He had worked as a printer and offset operator for Johnson Office Solutions and was known as a man of all trades. He loved to eat at buffets and didn’t like to wait on anyone to cook. Mr. Humphrey enjoyed eating sweets especially Little Debbie cakes. Mr. Humphrey cherished his granddaughter, Nicole Taylor, who helped take care of him in the later part of his life. He was a member of Oakland Baptist Church in Hazlehurst.
He was a son of the late Monroe David and Pauline Jarnigan Humphrey. He was also preceded in death by his wife, Rosie Videlia Murray; a son Johnny Mach Cooper; brother David Humphrey; and younger brother who was his sister’s twin that passed away at birth.
Survivors include his daughters, Dale (Darrain) Ellis of Hazlehurst, Sherry (Jeff) Berryhill of McRae; sons, Lewis (Rose) Cooper, Mitchell L. (Resa) Humphrey, and Charles Humphrey all of Hazlehurst; sisters, Linda (Welzie) Swafford of Tennessee and Pamela (Craig) Carter of North Carolina; brother, Danny Humphrey of Cornelia; 20 grandchildren; 26 great-grandchildren; and several nieces, nephews, and other relatives.
Services will be held March 9 at 2 p.m. from Oakland Baptist Church with Bro. Royce Hulett officiating and Dylon Berryhill giving the eulogy.
The family will receive friends at the church one hour prior to the service.
Interment will be in Oak Grove Baptist Church Cemetery.
Active pallbearers will be Lance Ellis, Dustin Ellis, Dylan Berryhill, Jeremy Cooper, Victor Cooper, and Nash Humphrey.
The family kindly requests members of Oakland Baptist Church Senior Adult Sunday school class, Buddy Rea, and Wilbur Dykes to serve as honorary pallbearers. Please meet at the church by 1:30 Wednesday.
Sympathy may be expressed by signing the online register at www.pearsondial.com.
Pearson-Dial Funeral Home is in charge.