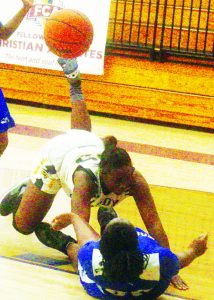 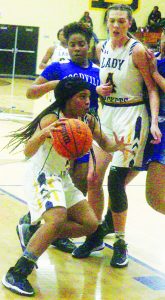 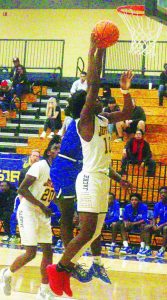 While Jeff Davis High’s girls basketball team is struggling this season with a 3-15 record, the Lady Jackets are showing marked improvement.
Last Tuesday, Coach Nikki Perry’s charges gave a good Woodville-Tompkins team a battle before falling by three, 49-46. Three days later, the JD girls pushed then-undefeated, 15-0, Swainsboro to the limit before losing by three again, 43-40.
Against Swainsboro, the Lady Jackets led 10-3 after one quarter and held a 22-20 halftime advantage. Entering the final eight minutes the teams were deadlocked at 30-30. But the Lady Tigers pulled away in the fourth quarter.
Saturday night, in a non-region game in Blackshear, the 16-5 Class AAA Lady Bears ran roughshod over their visitors 55-19.
The boys of Coach Bo Boatright were 10-3 through Jan. 14 but then suffered through a 4-game losing streak. They fell to Appling County, a team they had defeated in December, were upset by East Laurens, dropped a game to 21-1 Vidalia, and fell by six to Woodville-Tompkins.
But the Jackets battled back, getting a 61-53 win over Swainsboro, which holds down second place in the region standings, and then winning handily over Class AAA Pierce County, 61-48 in Blackshear.
Currently in 4th place in the region standings, the Jackets’ Feb. 8 home game against East Laurens could be a key game if they are going to make the playoffs.
The Jackets’ four remaining games are Region 2-AA contests. Last night (Tuesday) against Vidalia, this Friday against Bacon County in Alma, next Tuesday’s home game against East Laurens and Feb. 11 against Woodville-Tompkins in Savannah. A win in any of those games will clinch a spot in the top four in the region.