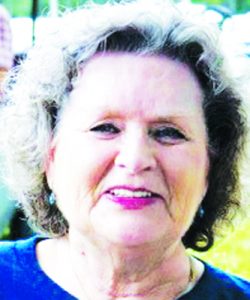 Mrs. Patricia Dianne Quinn Daughtry, 74, died Jan. 7 in Brunswick.
She was born in Hazlehurst, the daughter of Inez Hester Melluish and Everett Wesley Quinn. Patricia was part of military families much of her life, and as a result had traveled and lived in many places, particularly the far east including Japan and Guam. Patricia always had a lifelong eclectic curiosity of life and the world. She had degrees and studies in pre-law, computer programming, web and graphic design, sociology and was currently pursuing graduate studies in philosophy and religion at Valdosta State University. Throughout her life, she had many careers including veterinary technician, researcher, waitress, sales manager, and long-distance truck driver. However, the accomplishments she was most proud of were being the matriarch of her large family and providing a loving home to her many rescue pets.
In addition to her parents, Patricia was predeceased by a daughter, Karissa Wetzel. Surviving are her daughters, Angella Nabb, Chihara Johnson, Jillana McLoon, and Melissa Cox; 13 grandchildren; 17 great-grandchildren; half-siblings Sharon Martin, Wesley Quinn, Stanley Quinn, Karen Quinn, Calvin Quinn; two nephews; and many cousins including Rebecca Herin McEachin and Rachel Herin McEachin.
A memorial gathering of her family and friends is being planned for a future date.