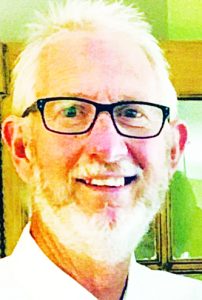 Mr. Kelvin P. Kerns, 62, of Hazlehurst passed away Nov. 8.
Mr. Kerns was born Jan. 14, 1959, in Jeff Davis County.
He is preceded in death by his parents, Elmer Parnell Kerns and Rosa Powell Kerns Dixon. He was a retired Industrial HVAC Tech from Propex and a member of Bridgeford Church of God.
He enjoyed carpentry and farming. He was a great shepherd to his livestock, which consisted of hogs, sheep, chickens and along with his best friend Dixie, that’s why he was known as the Animal Whisperer.
He was many things to his family, he was the best Pa in the world, a humble giant of a man casting a large shadow, and he was their oak in times of a storm, because he never wavered. He was a loving husband, father and grandfather, and loved spending time with them.
Survivors include his wife, Linda Hall Kerns of Hazlehurst; sons, Adam Lane Kerns (Zach) of Hazlehurst and Andrew Bryant (Somer) Kerns of Hazlehurst; sister, Karen Kerns Hutchinson (Tyrone) of Hazlehurst; brother, Jimmy Elmer Kerns (Edye) of Hazlehurst; grandchildren Rosaleigh Faye Kerns and Palmer Jean Kerns; several nieces and nephews.
Services were held Nov. 11 at Bridgeford Church of God with Jimmie Ryles, the Rev. Jeremy Deloach, the Rev. David Price and the Rev. Tyrone Hutchinson officiating. Interment followed in the church cemetery with Rev. Hutchinson officiating.
Honorary pallbearers were Jimmy McLeod, Thomas Turner, Tony Davis, Amadeo Olvera, Larry and JoAnne Trowell, Fernando Ramirez, Michael Conner, Carolyn Herndon, Bridgeford Church of God Adult Sunday School Class and members and staff of Hazlehurst Church of God Sunday School Office, Danny and Rhonda Joiner, and Rocky and Leila Renfroe.
Active pallbearers were Shawn Thompson, Nicky Lee, Graham Brantley, Aaron Brantley, Greer Smith and Rodney Sharpe.
Music was rendered by Lyndon Brantley, Hugh and Laverne Brantley, Charles Brantley, Kim Brantley Hinson and Greg Brantley and at the end of the service the congregation sang When We All Get to Heaven.
To sign the online registry, visit wainrightparlor.com
Wainright-Parlor Funeral Home was in charge.