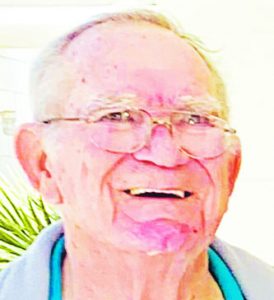 Mr. Wilbert Eugene “Gene” Boyett, 84, died peacefully at his home Oct. 6 under the care of Spanish Oaks Hospice.
Gene was born Aug. 24, 1937, in Candler County to the late James Coy Boyett and Myrtle Fordham Boyett. Gene was preceded in death by his wife and mother of his children, Marjorie “Marge” Fuchs Boyett; his wife, Mildred Jackson Boyett; brothers, Clifford Boyett and Bobby Joe Boyett; sisters, Nina Helton and Virginia Moore; and great-grandson, Dillon King.
After graduating from South Dade High School in 1955, Gene joined the United States Air Force and served his country for 20 years. He served a stint in Vietnam and met Marge while on base in South Dakota. After they were married, Gene and Marge were able to travel and see many interesting places they could never have seen in civilian life. Their children were born, one in Homestead, one in Hawaii, and one on Cape Cod. After his retirement from the Air Force, Gene and his family settled down in Glennville and he retired from Suburban Propane.
Gene was a faithful member of Zoar Baptist Church where he served in a number of capacities. Because he was so skilled at fixing things, he served on the maintenance committee every year prior to his illness. He was a gentle and kind person and all who knew him respected and loved him.
Survivors include his wife of 27 years, Rita Hall Boyett of Baxley; daughter and son-in-law, Vickie and Gordon King of Hortense; sons and daughters-in-law, Steve and Diane Boyett of Hazlehurst, Kyle and Delma Boyett of Hortense, and Chris and Melissa Nail of Baxley; 14 grandchildren; 18 great-grandchildren; and one great-great grandchild.
Services were held Oct. 9 at Zoar Baptist Church with the Rev. Wayne Williamson officiating and eulogy given by Chris Nail.
Interment followed in Lower Lotts Creek Cemetery in Statesboro with full military honors, where Gene was buried beside his beloved Marge.
Active pallbearers were Andrew King, Austin King, and Deacons of Zoar Baptist Church.
Music was rendered by the congregation, accompanied by Donna Gray.
In lieu of flowers, donations may be made to Zoar Baptist Church, 10170 Zoar Road Baxley, Georgia 31513.
Swain Funeral Home was in charge.