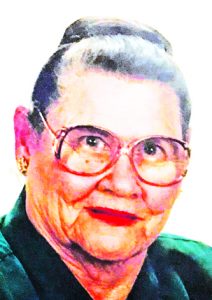 Mrs. Mary Eleanor Whitlock Wooten, 99, the daughter of Robert Albert Whitlock and Ida Cotter Whitlock of Montgomery County, passed away Aug. 22.
She was preceded in death by her parents, her beloved husband Joel O. Wooten Sr., and her half-brother Lt. James Leonard Durden, who was killed in 1944 at Normandy. She is survived by her sister Dorothy Whitlock McEachin of Macon, her son Joel O. Wooten Jr. (Sybrina) of Columbus and her daughters Pam W. Bird of Morehead City, N.C., Dianne W. Simmons (Tom) of Huntsville, Ala., and Carla W. Norman (Sandy) of Fair Oaks, Texas, and by 10 grandchildren and nine great-grandchildren.
Eleanor was born in Montgomery County Oct. 5, 1921, and grew up on a small farm near Long Pond during the depression. She was an excellent student. She graduated from Brewton-Parker College, and taught school in Alston and Hazlehurst. She married J. O. Wooten in 1949, and they were active and engaged members of the Hazlehurst community. She was a member of First Baptist Church, a member of Eastern Star and an early proponent of the Senior Citizens Center. She enjoyed books, education, travel and was a wonderful homemaker but she would quickly tell you her greatest enjoyment in life was her four children. She loved all her family, cared for and protected each of them, and spent endless hours making sure they were encouraged, educated and prepared for life.
The family wants to thank Wendy Williams, the staff at Pineland Personal Care Home and Serenity Hospice for their love and attention, for taking care of “Ms. Eleanor” and for making her feel like she was at home during her last months.
A private graveside service for family will be held Aug. 27 at 11 a.m. at Hazlehurst City Cemetery.
In lieu of flowers, memorial donations may be made to the University of Georgia or to Serenity Hospice of Vidalia or to a charity of your choice.
To sign the online registry, visit wainrightparlor.com
Wainright-Parlor Funeral Home is in charge.