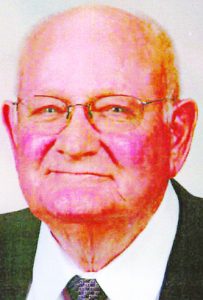 Mr. Eugene Evert Tate, 88 of Denton, passed away April 21 at his home. He was born March 17, 1933, in Coffee County to the late Emory Tate and Lula Dockery Tate. He was named after Georgia Governor Eugene Talmadge.
In addition to his parents, he was preceded in death by brothers, Roscoe, E. A., James and Thomas Tate; sisters Iris Jones and Ellena Mayfield.
Eugene graduated from Jeff Davis High School from the 11th grade in 1951. He attended Automotive Technical Trade School in Atlanta in 1951-52 where he received a certificate. He worked in the Waycross Railroad Shop until he was drafted into the U. S. Army. He took basic training in Camp Atterbury, Ind., and was sent to Fort Carson, Colorado Springs, Colo. He spent the snowy winters in 1953-54 at Camp Hale, Colo., north of the continental Divide, Tennessee Pass. Eugene won a plaque for 1st place M-1 Rifle Shooting Match in the 1st Bn 61st INF in 1954. He competed against three battalions.
While Eugene was in service he bought a 1929 Model-A Roaster for $65. When he was honorably discharged, he and Army friend, C. O. Nates, drove it home to Denton. They pulled off their shirts and rode with the top down and they ever more got blistered!
Eugene married his wife, Jimmie Nell Fletcher in 1959. They built a home in Jeff Davis County where they lived most of their 61 years of marriage. They had only one child, Dana Tate Vickers, of whom they were very proud. She went to college nine years and has a degree in teaching elementary education, school psychology and a Doctorate in Educational Leadership.
Eugene was a good hunter and fisherman. He had a successful career in farming on the Tate and Fletcher Farms from 1955 until retirement in about 1990. He was active in community and church projects. He helped build the new Mt. Pleasant Church. He was a Christian and dedicated in attending church. He was of the Baptist faith.
His wife is retired from the Jeff Davis County School System after 32 years in education, She has been retired for 26 years. They were members of the Jeff Davis Retired Educators Association and were on a committee to help plan and erect a monument in Hazlehurst in honor and memory of retired educators. The monument was completed in 2015.
He was a member of the Jeff Davis Veteran’s Association where he supported its activities.
He is survived by his wife, Jimmie Nell Fletcher Tate of Denton, daughter, Dana Tate Vickers and her husband, Greg Vickers of Denton; grandsons Lane and Jace Vickers of Denton, sister Lynora Sapp of Watkinsville; several nieces, nephews and cousins.
Services were held April 25 at Sims Funeral Home Chapel with Brother William Pope officiating, Pam Anderson and Roy Anderson gave the eulogy. Entombment was at Douglas City Cemetery with military honors provided by Jeff Davis Veterans Association.
Sympathy may be expressed by signing the online registry at www.simsfuneralhome.org.
Sims Funeral Home was in charge.