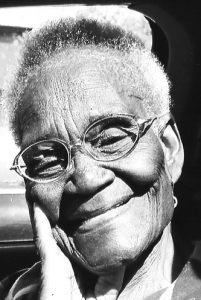 Services for Mrs. Bessie Mae Thomas “Ms. Mary” Mason, who died Aug. 24 in Albany, will be held Sunday, Sept 1, at 1 p.m. at Bennett Tabernacle Holiness Church, 26 Martin Luther King Jr. Blvd., Hazlehurst. Visitation will be Saturday, Aug. 31, from 4-6 p.m. at King Brothers Funeral and Cremation Service.
Ms. Bessie was born and raised in Hawkinsville where she met Willie D. Mason and together they had 10 children, but altogether she had 15 children which seven of them preceded her in death. Ms. Bessie moved to Hazlehurst in 1968 and resided there for several years and was well known for riding her bike that Ms. Bessie called Rolls Royce. As an employee she worked for Bill Dixon Seafood until it closed. She later moved to Albany where she could get the best doctors, due to her health. There Ms. Bessie confessed Christ and joined Free Life Church. Her greatest job was meeting people for she met no stranger.
Survivors include four sons Tommy (Johnnie Mae) Mason of Baconton, Billy Mason of Albany, James Mason of Macon, and Benny (Mindy) Mason of McRae; four daughters, Elizabeth Mason of Albany, Nancy Lovett, Diane Mason, and Patricia (Michael) Farrington, all of Hazlehurst; 27 grandchildren, 63 great-grandchildren, 11 great-great-grandchildren and one child she claimed as her grandchild, Jonathan “chop-chop” Miles and a host of cousins and friends.
Condolences may be made at www.kingbrothersfh.com
King Brothers Funeral Home and Cremation Service is in charge of all professional services.