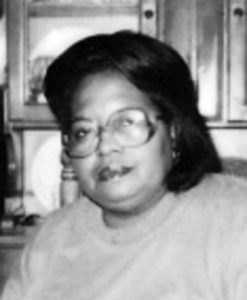 Services for Ms. JoAnna Dotson, who died April 2, were held April 7 at St. James AME Church with Pastor Joyce Batten delivering the eulogy. Other ministers service with Evangelist Dorothy Dotson, Pastor Willie Thomas and Brother Willie Eady.
A selection was delivered by Sister Cynthia Burney and the family.
Ms. Dotson was born Feb. 4, 1947, to the late Elias Jack Dotson Sr and Willa Mae Thomas. Born and raised in Hazlehurst, she attended Hazlehurst High School and worked at various factories until 1983, when she enrolled at Ware Tech and became a Licensed Practical Nurse. She worked as a nurse until she was diagnosed with congestive heart failure. In 1995 the doctors told her son to “call the family,” as their mom was not going to live much longer, but God had other plans and blessed her with a heart transplant and 23 additional years on earth.
JoAnna spent those gifted years being a devoted mother, grandmother, sister, aunt, and friend. As a member of Antioch CME Church of Hazlehurst, she handled their annual Black History program for over 20 years and assisted with missionary and other programs.
She was preceded in death by her late parents, brothers, Elias (Minnie Mae) Dotson Jr., Roland and Eugene Dotson; sister, Evelyn (Herman) Gibson; son and daughter-in-law, Ramsey and Rene Ceasar-Williams.
Survivors include sons, Johnny L. and Shon G. Williams of Hazlehurst; grandchildren, Roderigus (Tomomi) Ceasar of Florida/Japan, Michael McCloud, and Irenia Williams of Hazlehurst; sisters, Bettye (Maxie) Burney of Hazlehurst and Lavern Mann of Florida; brothers, Thomas (Dorothy) Dotson and Donald Dotson of Hazlehurst; and a host of nieces, nephews, cousins, and friends.
Pallbearers were grandsons and nephews.
Honorary pallbearers were brothers/church stewards.
Flower attendants were family and friends.
Interment was in Hall-Wilcox Cemetery.
King brothers Funeral Home and Cremation Services was in charge.