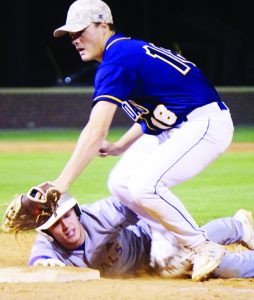 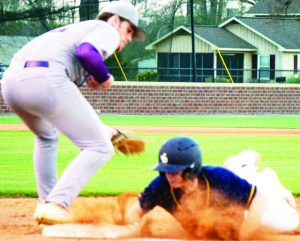 It was a cold day last Tuesday when Jeff Davis High’s 3-0 baseball team hosted Appling County. And the Jacket bats were as cold as the weather as they fell 4-2 to the Pirates.
After starting the season with 9-hit game against the Pirates the previous week in a 10-0 win, and getting 12 hits against Jones County, and 10 against Wayne County in their other two games, JD could manage only one hit against Appling. Then, two days later, in short-sleeve shirt weather, the Jackets had a 14-hit attack against Bleckley County, winning 11-2.
The cold bats were hard to explain as Kaden Lewis’ second inning single was the Jackets only hit against the Pirates.
Jeff Davis got its two runs in the second inning, as Caleb Leggett walked, went to second on a passed ball and took third on Caleb Chaney’s sacrifice bunt. Jashaun Kirby then reached on a dropped third strike and Leggett rushed home to score. Kirby advanced to second and then went to third on Lewis’ single. Cade Walters then reached on a fielder’s choice and Kirby scored from third to make it 2-0.
That lead lasted until the fourth when a hit batter and a walk got starting pitcher Cole Baucom in trouble. A sacrifice bunt and a pair of two-out singles tied the game 4-4.
That score stood until the top of the seventh. With Jashaun Kirby on the mound, the Pirates sandwiched a single between a ground out and a strikeout. Kirby got the next batter to ground into what should have been an inning-ending out. But a bad throw to first allowed the Pirate runner to score all the way from first base, putting the visitors up 3-2. A single made it 4-2.
In the bottom of the inning, the Jackets put themselves into position to tie the game. Cade Walters walked on a 3-2 pitch bringing the top of the lineup to the plate. Garrett Taylor was hit by a pitch putting runners at 1st and 3rd with no one out. Garrison Miles’ sacrifice bunt put both runners in scoring position. But that was follow by a pair of strikeouts and the Pirates had the win.
Lewis’ single was the only hit for Jeff Davis. Kirby and Walters both drove in a run.
The two unearned runs in the top of the seventh gave Kirby the loss, though he pitched well enough to win. He went three innings, giving up three hits, walking two and striking out one. Baucom pitched four innings, giving up two runs on four hits, walking two and striking out three.
The Jackets spotted Bleckley to a 1-0 lead in the second inning but then scored nine runs over the next two innings as they cruised to the 11-2 win.
In the bottom of the second, the Jackets sent nine players to the plate. Leggett started things with a single. He stole second and Kirby singled to score him to make it 1-1. After Kirby went to second, Hamp Hayes grounded to shortstop and was safe on a fielder’s choice as Kirby beat the throw to third. Walters then doubled to score Kirby, making it 3-1. Hayes and Walters scored on a Taylor single, and Taylor scored on a Colby Marchant double to make it 5-1 going into the third inning.
In the third, Jeff Davis sent 10 players to the plate. Chaney drew a one-out walk to begin JD’s 4-run outburst. Kirby and Hayes followed with singles to load the bases. Then Walters and Taylor drew walks to drive in Chaney and Kirby, making it 7-1 with the bases still loaded. After Hayes was forced out at home on a fielder’s choice, Marchant got his second double of the game, sending Walters and Taylor across the plate to make it 9-1. The Jackets ended the third with the bases loaded.
The Jackets got a single run in the fifth as Marchant singled and pinch runner Conner Rea scored on a single by Leggett.
The Jackets added an insurance run in the sixth as Walters was hit by a pitch with two outs. Taylor then walked to push Walters to second and Miles singled to center scoring Walters just before Taylor was thrown out trying to reach third base to end the inning.
Marchant paced the offense with a pair of doubles, a single and three RBI. Kirby had three singles and an RBI, Leggett two singles and an RBI, Walters a single and double and two RBI, Taylor two singles and three RBI, Miles a single and an RBI, and Hayes a single.
Miles picked up the win on the mound. He went three innings, giving up one run on two hits,w walking none and striking out three. Leggett threw two innings, giving up no runs on two hits, walking one and striking out five. Metts went one inning, giving up one run on three hits, walking two and striking out two. White closed out the seventh, giving up no runs on no hits, walking none and striking out none.
Score by innings:
ACHS 0 0 0 2 0 0 2 -4
JDHS 0 2 0 0 0 0 0 -2