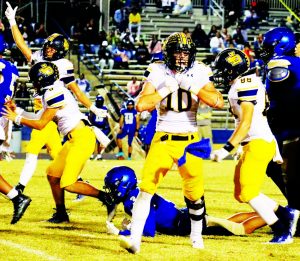 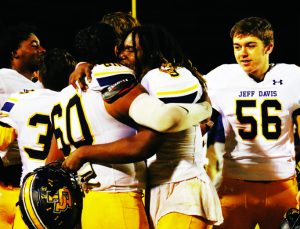 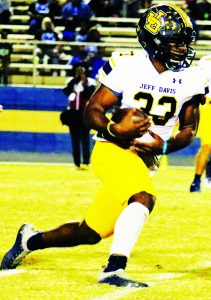 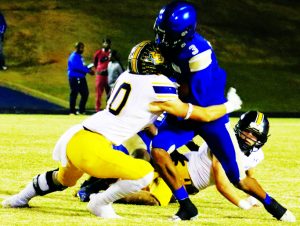 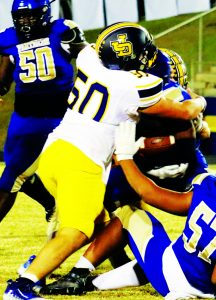 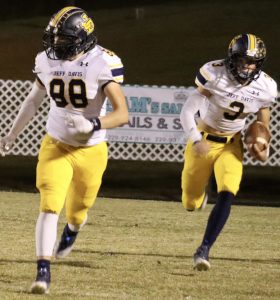 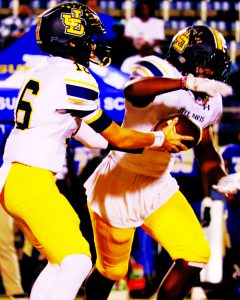 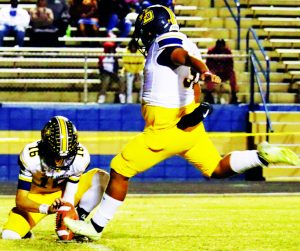 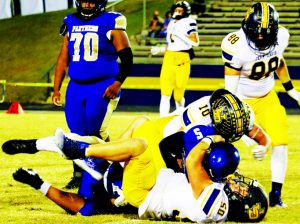 Jeff Davis High school avoided a winless 2022 season Friday night in Americus as they erased a 19-0 halftime deficit and pulled out a 22-19 victory over Sumter County High School to finish the season 1-9. Sumter also finished with a 1-9 record.
The Jackets’ heroes in the game were members of the offensive line as they controlled the line of scrimmage most of the game, enabling the JD offense to win with a ball-control offense.
The 19-0 halftime score was a bit deceptive as it appeared the Yellow Jackets had the superior team despite the score. The second half was all Jeff Davis as the young Jackets refused to fold their tents after intermission.
The Yellow Jackets started their first possession of the game inside their own 10 yardline. With the JD offensive line controlling the line of scrimmage, Jeff Davis put together a 7-play drive to the Sumter 44. Peyton Laney took a pitch from quarterback Colby Beach for a 25-yd. run to key the drive.
But, on 1st-and-10 at the Panther 44, a dropped handoff was picked up by a Sumter defender and he raced 51 yards for a score. The extra point failed but Sumter had a 6-0 lead.
After the ensuing kickoff, Jeff Davis started at their own 23 and began marching steadily down the field. With the offensive line carving out big holes in the Sumter defense, the drive reached the Panther 10 yard line after 11 plays lasting into the second quarter. On the 12th play, Laney carried to the Sumter 2 but an unfortunate push in the back, some 10 yards behind the play, drew a yellow flag, resulting in a 14-yd. loss.
On the next play, a Panther defender picked off a tipped pass and returned the ball to the Sumter 44.
From there, the Panthers scored in five plays, helped along by a 15-yd. walk-off against the Jackets. After the 31-yd. scoring pass play, the extra point kick made it 13-0.
Jeff Davis took the kickoff and moved from their 18 to the 38, thanks to a 9-yd. Weaver run and a 14-yd. pickup by Laney.
But then the Panthers got their second interception of the night and were in business at the Jeff Davis 40. They couldn’t capitalize and the Jackets took over at their 20 after a punt.
A 10-yd. run by Weaver and a 14-yd. Laney run were keys in a 7-play drive to the Panther 44. But then things stalled and, with time running out in the first half, the Jackets went for it on 4th-and-14 at the 48 but the pass fell incomplete.
The Panthers scored in a hurry on a 38-yd. pass play, a 10-yd. run and a 5-yd. scoring pass into the back corner of the end zone.
The teams went to the dressing rooms with Sumter leading 19-0.
The Jackets took the second half kickoff and started at their own 15. From there, they steadily marched down the field in 14 time-consuming plays to get on the scoreboard.
It was obvious that the Sumter defensive front was no match for the Jeff Davis front wall as the Yellow Jackets kept running the same play over and over with the Panthers helpless to stop the running game. Weaver carried the ball 12 times in the 14-play march, picking up 56 yards. He averaged almost six yards per carry on his first nine runs. Things got tough when the Jackets got inside the 10 yard line as Weaver scored on a 2-yd. run on 4th-and-goal. Fabian Valdelamar kicked the extra point to make it 19-7.
After the ensuing kickoff, the Panthers took over at their own 48 and, on 4th-and-2, they went for the first down but the Jacket defense dumped the ball carrier for a 1-yd. loss and Jeff Davis took over at their own 43.
After getting a first down in Sumter territory, Laney took the ball on an inside reverse and with some nifty running he eluded several blockers and followed Latrell Sellers’ downfield block to scamper 29 yards, all the way to the Panther 17.
Then the Jackets went back to their bread-and-butter play with Weaver carrying the ball. On 4th-and-2 at the nine, Laney took the handoff and picked up just enough for the first down. Beach then retreated to pass, found no one open and scrambled to the five. Weaver scored on the next play, Valdelamar added the P.A.T. kick and the Jackets were within 19-14 with it still early in the fourth quarter.
After the kickoff, Sumter began chewing up large pieces of real estate, moving the ball to the Yellow Jacket 23 yard line. But on the next play, Jude Worthington intercepted a Panther pass at the goal line and returned it all the way to midfield to set up the Jackets’ go-ahead touchdown.
Weaver got two, Laney seven and Weaver one for a first down at the 40. Two more 9-yd. runs moved the ball to the 22. On the next play, Beach threw a strike to Karter Galbreath over the middle, Galbreath broke a tackle at the 10 and then dragged another defender into the end zone to put the Jackets ahead 20-19.
Coach Lance Helton elected to go for two on the P.A.T. and Galbreath took the ball on a reverse and threw to a wide open Beach in the end zone for a 22-19 lead with 4:47 left to play.
After the kickoff, Sumter quickly moved the ball into Jacket territory but turned the ball over on downs at the 39. But on the next play, Sumter fell on a Jacket fumble and they had the ball back at the Jacket 43.
A penalty backed them up to their own 48. On 3rd-and-13, a 17-yd. pass play gave he Panthers a first down at the Jacket 34. On 3rd-and-8, the Panthers had time for one more play. They threw a pass over the middle, Worthington picked it off and the game ended with Jeff Davis on top 22-19.