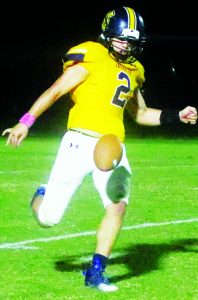 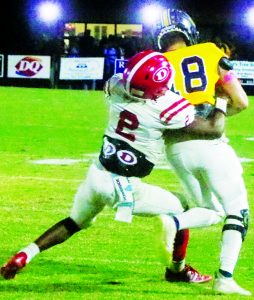 Wesley Brown is brought down from behind 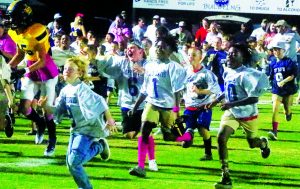 It was Rec Night at Friday’s game 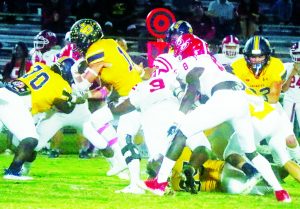 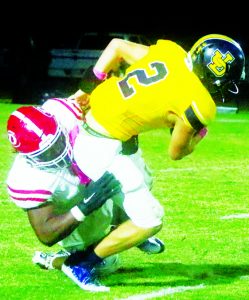 Karter Galbreath is brought down

Coach Lance Helton and his staff unveiled a new offense Friday night in the Yellow Jackets’ home game against Dodge County, as the staff abandoned Helton’s signature double-wing offense in favor of “wildcat” and “shotgun” offenses. That certainly came as a surprise to Dodge County and to Yellow Jacket fans as well.
The Jackets wasted no time revealing their offense as they took the opening kickoff, getting a 14-yd. run from Terrance Clemons with Carter Mullis clearing the way downfield. The Jackets could get no closer than the Indian 47 from where Mullis booted a 45-yd. punt that rolled dead at the Dodge 2.
After two penalties backed up the Indians to inside the one, Dodge moved out to a first down at the 17. But on the next play, freshman linebacker Karter Galbreath smelled out a pass in the flats and nailed the receiver for a 5-yd. loss and three plays later Dodge had to punt the ball away after Mullis came up with a big hit from his linebacker position.
After an exchange of punts, Dodge moved the ball out to midfield where, on 3rd-and-5, defensive end Amarion Mitchell broke through to sack the Indian quarterback.
The first quarter ended in a scoreless tie but, midway through the second quarter, the Jackets got their offense untracked. Starting at the JD 30, with sophomore quarterback Colby Beach in the shotgun offense, junior tight end Wesley Brown got behind the secondary and Beach made a perfect throw as Brown made an over-the-shoulder catch for a 26-yd. completion to the Indian 44. After a 5-yd. completion to senior Payton Laney, Beach hit Clemons on the left side and the senior broke a tackle and raced 39 yards into the end zone. Fabian Valdelamar kicked the extra point as holder Beach made a great save on a wide snap and Jeff Davis led 7-0.
Jeff Davis started its next possession at the JD 34, and Beach went to work again. After passes to Laney picked up two and lost two, and two straight penalties, the Jackets faced 3rd-and-20 at the 24. Beach then threw a perfect strike over the middle to ninth grader Latrell Sellers who stretched out for the grab at midfield and raced to the Indian 31 for a 45-yd. pickup. On the next play, Beach threaded the need with a pinpoint pass to Clemons for 23 yards and a 1st-and-goal at the eight. Ty Weaver bulled his way to the two and Clemons scored on the next play. Valdelamar kicked the extra point as Beach again made a great save to get the ball in place for the kick.
But the 14-0 lead was short lived as Dodge drove the ball 53 yards in nine plays, scoring on a 9-yd. run to cut the score to 14-7 at halftime.
Dodge took the second half kickoff and reeled off runs of 12, 20 and 19 yards to quickly get to a 1st-and-10 just outside the 10 yard line. Then the Yellow Jacket defense put up a valiant stand as Dodge faced 4th-and-1 at the two when they scored on the next play. The kick tied the game 14-14.
On the Indians next possession, they threatened to score again as they got the ball inside the Jacket 20. But Sellers picked off a pass over the middle at the 10 and returned the ball out to the 30.
After an exchange of punt, the Jackets got the ball at the 15 as the third quarter came to an end. They got a couple of first downs, the second on a 13-yd. Clemons run, and three plays later Clemons got outside around the right side and sped 24 yards to the Dodge 37. But three plays later, Dodge picked off a pass and began their go-ahead touchdown drive at their own 15. They almost scored on a 79-yd. run but Clemons caught the runner from behind, dropping him at the two. The Indians scored two plays later to go up 21-14.
But the Yellow Jackets refused to quit.
JD recovered a squib kick at the 44. Clemons ran for eight and, two plays later, Beach threw a strike to Laney who broke a tackle and picked up 11 yards. After a run got nothing, Clemons got seven and then three and another three for a first down at the 26.
Galbreath, in at quarterback, got four more and Laney dashed for 10 more to the 11. After Laney carried to the eight and an incomplete pass, the Jackets had time for one more play to tie the game. Beach came back in at quarterback and tried to hit Clemons over the middle but the pass was intercepted and Dodge had the victory.