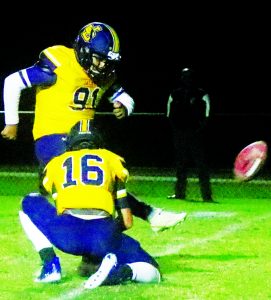 Terrance Clemons on the run

Jeff Davis High’s football team went into Friday night’s game against 4th ranked Cook County as a 38-pt. underdog.
But the youngsters amongst the Yellow Jackets did a lot of growing up and battled tenaciously before falling 31-15 to the 5-1 Hornets. The battle in the trenches seemed especially brutal as the young Jackets fought the older and quicker Cook front liners tooth-and-nail. After stumbling at the start and finding themselves quickly down 14-0, JD played Cook to a virtual stalemate for the remainder of the game.
The game got off to a bad start for the Yellow Jackets as they took the opening kickoff and went backwards. And on 4th-and-23, punter Carter Mullis, playing in his first game after being sidelined all season with an injury, took a wide snap, got pressured and was dropped at the 16, setting up the Hornets in scoring position.
After a 5-yd. penalty, Cook scored in two plays and led 7-0 early in the first quarter.
On the Hornets’ next possession, a long quarterback scramble set up the next score, putting the visitors up 14-0.
Mistakes continued to plague the Jackets after the ensuing kickoff as a penalty and a fumbled handoff left JD facing a 2nd-and-18. That’s when the young Jackets decided they had had enough. Runs of 17 and 15 yards, the second coming on the first play of the second quarter, pushed the Jackets into Cook territory at the 38.
From there, the Jacket offensive line began carving out holes and, using grueling 2-, 3-, 4- and 5-yd. bursts JD marched down the field but stalled and found themselves facing a 4th-and-10 at the 16. Coach Lance Helton called on freshman Fabian Valdelamar who booted a 33-yd. field goal with plenty of room to spare.
But Cook was penalized on the play and Helton took the walk-off putting the Jackets at the eight, facing 4th-and-1. That’s when sophomore quarterback Colby Beach retreated and fired a strike to a wide-open senior Peyton Laney in the left side of the end zone for the score. Valdelamar kicked the extra point to cut the visitors’ lead to 14-7.
Following the kickoff, Cook picked up a couple of first downs but then the defense tightened. Defensive end Ian McDaniel came up with a hustling defensive play to prevent a long gainer and the JD defense stifled the Hornets as the teams went to the dressing room with Cook on top 14-7.
Cook took the second half kickoff and marched 73 yards in nine plays to get on the board again. The big play in the drive was a 41-yd. run up the middle with Jacket Terrance Clemons running down the runner from behind at the one. It took them two plays to score as they upped their lead to 21-7
Cook’s next possession started at their 29. They marched down the field but, when they reached the Jacket 20, the JD defense tightened up. On 3rd-and-8 from the 18, Clemons broke up a pass over the middle and Cook was forced to kick a 36-yd. field goal to make it 24-7.
After a penalty on the ensuing kickoff, Jeff Davis had to start at their own 16. On the first play, Laney broke open for a 20-yd. jaunt to the 36. The Jackets moved the ball into Hornet territory but things went sour and they faced a 1st-and-25 from their own 44.
Clemons then took the ball around the right side with the ball-handling in the backfield so effective that Cook defenders raced to the wrong side of the field and Clemons rambled all the way to the Cook 32 for a first down.
But the Jackets could get no closer than the 29 where Cook took over on downs. It took Cook 11 plays to cover the distance to make it 31-7.
Still, the Jackets refused too quit. Clemons pulled out of an attempted shoestring tackle at the 32 and sped 53 yards to the Cook 15.
On the next play, Beach, under extreme pressure, got off a pass to Laney who made a leaping grab at the one. Jeff Davis scored on the next play and went for two, making the final score 31-15.