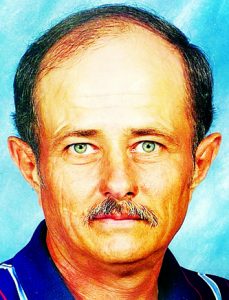 Mr. Simon Eugene Dawson, 65, of Hazlehurst, died Sept. 1 at Memorial Hospital in Jacksonville, Fla.
Simon Eugene Dawson was the youngest son of the late Will and Mae Dawson. He was a dedicated and faithful member of Oakland Baptist Church. He dearly loved his children. His greatest joy in life was being a “Pa” to his grandchildren and great-granddaughter. He was an inspiration to everyone who met him. He was a hardworking and very strong will person. He has battled with an unknown disease since the late 1980s that resulted in him losing his limbs in 1998. He has always been determined to continue to live life to the fullest. He never complained or gave up no matter the circumstances. After a long battle with this disease over the years, his body was tired of fighting and he went to be with his Heavenly Father. A few minutes before Eugene died, one of his doctors came and told the family that the last bone marrow biopsy the results came back, he had a rare type of leukemia, after all the years of not knowing, to find out the day he died. He will be missed greatly by his family and friends.
Survivors include his son, Mathew Eugene Dawson of Virginia; daughter, Sumer Suzanna Perkins of Panama; grandchildren, Reanna Perkins, Eyan Perkins, Noah Perkins, Gabby Dawson, and Elijah Dawson; great-granddaughter, Bonnie May Stewart; sisters and brothers-in-law, Ellen and Randall Miller of Chatsworth, Gail and Tommy Hogg of Dalton, and Janice and Cliff Litke of Hazlehurst; brother and sister-in-law, Boyce and Melba Dawson of Douglas; several nieces and nephews.
Services were held Sept. 8 at Oakland Baptist Church, with the Rev. Royce Hulett and the Rev. Dustin Hutto officiating.
Interment followed in the church cemetery.
Honorary pallbearers were the Senior Sunday School Class of Oakland Baptist.
Active pallbearers were Chris Parlor, Brad Johnson, Brandon Parlor, Chad Brewer, Eric Miller, and Chris Dawson.
Music was rendered by Ann Walters and Vic Brantley.
Wainright-Parlor Funeral Home was in charge.