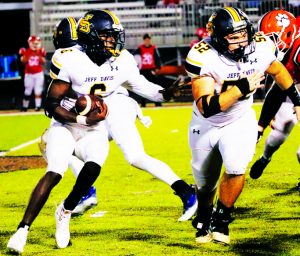 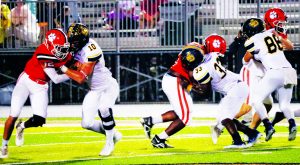 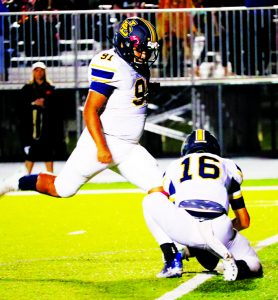 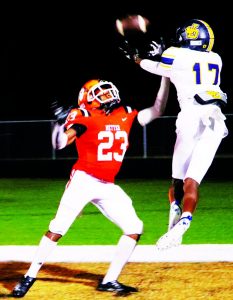 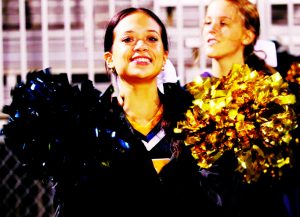 Colby Beach rolls out to pass

Jeff Davis High’s 30-15 loss to Metter Friday night in Metter was not as lopsided as the final score may indicate as the Yellow Jackets had opportunities to score but came up short.
The first opportunity came in the opening quarter as JD made a deep foray into Tiger territory but stalled. Freshman kicker Fabian Valdelamar tried a 46-yd. field goal that barely missed as Metter escaped the early scoring chance for the Yellow Jackets.
Taking over at their own 20, the Tigers got runs of 11 and 15 yards with Jacket freshman Karter Galbreath making a shoestring tackle to stop the 15-yd. run from being a 69-yd. scoring jaunt. On the seventh play of the drive, Galbreath and Terrance Clemons threw a Tiger runner for a 3-yd. loss and Metter faced a 4th-and-7 from the JD 28. But on the next play a Metter receiver got wide open in the end zone and took in a pass for a 28-yd. TD pass.
The kick-after made it 7-0.
On the first play after the kickoff, Clemons picked his way through a hole for a 13-yd. run to the 47. But two plays later, a pass interception gave Metter the ball at the Jeff Davis 46. Seven plays later the Tigers scored on an 8-yd. run to up their lead to 14-0 early in the second quarter.
After the kickoff sailed into the end zone, the Jackets started at their 20 and quickly moved into Metter territory. But a fake punt on 4th down failed to pick up the necessary yardage and Metter took over at their own 48.
Clemons then knocked down a Tiger pass to prevent a big pickup of yardage.
But the Tigers continued to march down the field and scored on a 5-yd. run to make it 20-0. After a penalty, Metter went for two points and made it to take a 22-0 lead.
Just before halftime, the Jackets pounced on a Metter fumble at the Tiger 33.
With time running out, quarterback Colby Beach used his arm to get the Jackets inside the five yard line but the Jackets couldn’t score as the first half clock ran out with Metter up 22-0.
Most of the third quarter was spent with the two teams trading punts until late in the stanza when Latrell Sellers and Landon Roberson broke through to block a Tiger punt and put the Jackets in business at the Metter 37.
Peyton Laney picked up 14 yards through a huge hole in the middle of the Metter defense to move the ball to the 23. Beach then completed a pass to pick up 12 more yards to the 11. Three plays later the Jackets scored from four yards out. They went for two with Beach pitching to Jude Worthington on an option and the Jackets were within 22-8.
The next time the Jackets got the ball was on their on 10 yard line and things didn’t go well. A penalty and a couple of miscues left the Jackets at their own one and, on the next play, the Tigers recovered a fumble in the end zone. The Tigers went for two and made it to up the tally to 30-8.
The Jackets fought right back, and marched down the field with a mixture of running plays and passes to get on the board again, this time on a Beach pass. Valdelamar’s P.A.T. kick made the final score 30-15.