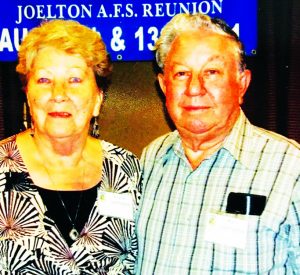 Kenneth Jerald Varnadoe
July 12, 1934 – March 17, 2022
Joyce Inez Hixon Varnadoe
March 7, 1940 – May 15, 2022
Mr. Kenneth Jerald Varnadoe, 87, left this earthly life peacefully, March 17 in his sleep after a day spent doing his favorite thing … Fishing!
Mrs. Joyce Inez Hixon Varnadoe, 82, left this earth to join her lifelong love May 15 after a courageous fight with Alzheimer’s.
Kenneth was a native of Lumber City, one of six children born to Earl and Lettie Mae Varnadoe. Joyce was a native of Lookout Mountain, one of six children born to Bertha Mae and Farris Hixon.
Kenneth joined the U.S. Air Force at the age of 18. Joyce met Kenneth while he was stationed at Lookout Mountain shortly after he enlisted. They were married Sept. 11, 1958, and would have shared their 64th wedding anniversary this year.
Kenneth was stationed overseas in the early years of their marriage and later they created a new life on the Mississippi Gulf Coast when Kenneth was stationed at Keesler Air Force Base in Biloxi in 1961. Joyce and Kenneth remained lifelong residents of the Mississippi Gulf Coast for the rest of their lives.
Joyce was preceded in death by Kenneth, who departed this life to prepare Joyce for the transition to their next life together. They leave behind their children, Kimberly Varnadoe (William) Carden, Michael Varnadoe, Cheryl (John) Masters; grandchildren, William Leighton Carden and Savannah Dey Carden; and great-granddaughter, Hydaelyn Joyce Bryant Carden. They are survived by their respective siblings, Joyce’s sisters Myra, Ora and Ruth, and Kenneth’s sister, Earline, and brothers, Harvey and Wayne and many in-laws, cousins, nieces, nephews, and friends.
Kenneth and Joyce were a loving and devoted couple. They were caring and supportive parents and role models. They will be remembered fondly as generous and compassionate souls.
A celebration of Kenneth and Joyce’s life together will be held graveside, Sept. 10 at 11 a.m. at Fishing Creek Cemetery, Lumber City. A fellowship meal with family and friends will follow at Fishing Creek Baptist Church.