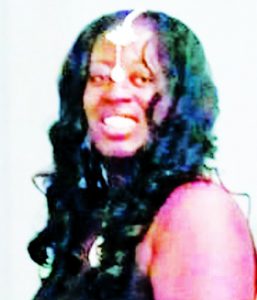 Mrs. Chante Denise Mobley, 46, passed away Aug. 14.
She was born to Shirley Paulk and the late Danny Dasher Sr. April 9, 1976, in Appling County.
She was a life-long resident of Baxley. She spent a brief time, residing in Jacksonville, Fla. She attended Appling County High School and was employed as a cook at various restaurants in the area.
She joined Life Cathedral Mission. She believed in the Lord, and was a true fighter, fighting in faith until the end. She shared her testimony with those who came to visit her.
Chante was a compassionate, straight-forward person. She enjoyed speaking her mind. God dealt with her with dreams and visions, and she would tell others what God had shown her. She loved helping others and brought joy, sunshine, and a smile to many.
Chante was the owner of Tae Tae’s Catering. Cooking and showing love to family and friends were her greatest joys. She also enjoyed entertaining, whether at a cook-out, a party, or a family gathering, Chante could be found in the kitchen, preparing delicious dishes with her family.
Preceding her in death are grandparents Roosevelt and Laura Roberts Hood, Alexander Dasher Sr. and Marilyn Dasher; father, Danny Dasher Sr.; and son, Kharan R. Dasher.
Survivors include her husband, LeShawn Mobley of Jacksonville, Fla./Baxley; children: Dominique and Kim Moore of Baxley, Danny Dasher of Savannah and Malcolm Dasher of Hazlehurst; step-son, LeShawn Mobley of Baxley; grandchildren Terry M. Moore, Shaniya Moore, and Kimiah Moore, all of Baxley; mother, Shirley Paulk; siblings Danny and Gloria Hood, Vernon and Greta Dasher, Virginia Hood, Henry Dasher, Tabatha and Corie Clements, and a host of other brothers and sisters, all of Baxley; god-son, Jeremiah Wright; and a host of uncles, aunts, cousins, nieces, nephews, and friends.
A graveside service was held Aug. 20 at Old Field Cemetery in Baxley.
King Brothers Funeral Home, Hazlehurst, was in charge. www.kingbrothersfh.com