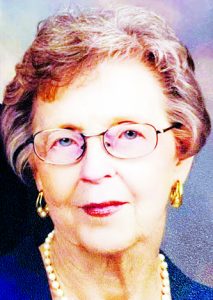 Mrs. Joyce Roberts West, 88, of Hazlehurst, passed peacefully in her sleep March 6 at The Landings of Douglas.
Mrs. West was born Feb. 21, 1934, in Athens. She is preceded in death by her loving husband of almost 65 years, Buford West, her daughter, Melissa West Deen, brother, Edgar (Bubba) Roberts, sister, Pat Roberts Upchurch, mother and stepfather, Addie and William Marchman, and father, Zachery Roberts.
Mrs. West was a loving wife, a dedicated mother and the best Nana ever. She was a homemaker and a wonderful cook who took great pleasure in preparing delicious feasts for her family on a daily basis for most of her life. She was a master seamstress and dressed her girls in beautiful homemade clothes while they were in her home. She enjoyed working in her yard, planting and tending to her beautiful flowers and plants.
She was a member of First Baptist Church where she faithfully served in many areas for many years. She and Mr. West were members of the region wide square-dancing group for several years and traveled the state dancing their hearts out. They were heavily involved in many community events throughout their lives and were blessed with many lasting friendships made along the way. She was a sweet saint who worked tirelessly to serve in any area she saw a need. Her family was her favorite ministry and she gave every ounce of herself to serve them.
She was the love of Buford’s life and he was hers. They were true sweethearts for life and were admired by many for their sweet displays of affection and total commitment to one another.
Survivors include her daughter, Robin West Aycock; granddaughter, Amber Aycock; grandson, Alex Aycock (Tonia); great-grandsons, Andrew Aycock and Axel Aycock; and son-in-law, Clayton Deen.
Pallbearers were Stanley Land, Steve Land, Hugh McBride, Keith Rentz, John Johnson and Joe Allen Yawn.
Honorary pallbearers were Jimmie Ryles, Chris Spence, Inez Garnes, Vivian Stone, Jackie Johnson, Sara Jo Thomas, Cindy Hulett, Bobby and Flora Mosley, Mike and Gayle Cothern, Jimmy and Mary Nester, Wayne and Gwen Howard, Ed and Sue Wilson, Fannie Lou Rentz, Gene and Leona Armstrong, Leroy and Elaine Graham and Pete and Libby Turner.
Services were held March 11 at Hazlehurst First Baptist Church with the Rev. Brad Waters and the Rev. Ryan Clements officiating. Interment followed in Palms Memorial Garden.
Music was rendered by Brigette Corbin, Mike Cothern and the congregation.
Wainright-Parlor Funeral Home was in charge.