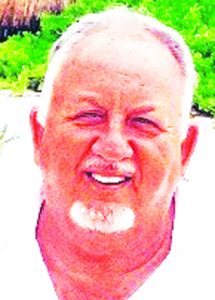 Mr. Randy “Bug” Smith, 60, of Hazlehurst, passed away April 4 at Jeff Davis Hospital.
Randy was born Sept. 11, 1961, in Coffee County.
He is preceded in death by his father, Larry Howe Smith and mother, Judy Wooten Robinson.
He was employed with Williams Brothers trucking, a member of First Baptist Church of Hazlehurst and a member of the Jeff Davis Board of Education.
Randy was a family man; he loved his family dearly and enjoyed spending time with them. He also was an avid sports fan, loved everything about sports, from broadcasting, and enjoying the Jeff Davis football games, to watching the UGA college games on TV. He was a devoted cheer dad while his girls were in grade school and loved being included with everything that involved the girls.
If you knew Randy, you loved Randy. He was Mr. Personality and he lived life to the fullest: always smiling, joking, and having a good time. He will be sadly missed by all who knew him and loved him.
Survivors include his wife, Cherie Swain Smith of Hazlehurst; daughters, Allison Smith of Hazlehurst and Ivey Grace Smith of Hazlehurst; brothers, Tim Smith (Sheila) of Lumber City and Ashley Smith of Jacksonville, Fla.; several cousins, aunts, uncles, nieces and nephews.
Honorary pallbearers were Roy Waters, Marty Walters, Clay Crosby, Steven Wilcox, Craig Wilcox, John Girtman, Vane Dyal, Tracey Rowell and Roger Oligive.
Active pallbearers were Josh McClendon, Hunter Beck, Conner Coleman, Ross Dubberly, Hamp Hayes, Chandler Davenport and Garrett Walters.
Services were held April 6 at First Baptist Church of Hazlehurst with the Rev. Brad Waters and the Rev. Steve Glosson officiating and Coach Lance Helton giving the eulogy.
Interment followed in theMt. Pleasant Cemetery in Snipesville.
Music was rendered by Brigette Corbin and Hal Cox.
Wainright-Parlor Funeral Home was in charge.