The city-owned Twisted Pine Golf Course turned out to be the main topic of conversation at last Tuesday’s meeting of the Jeff Davis County Commission.
The city announced on Facebook last Monday that the council would meet with the county commissioners the following day to discuss the future of the golf course. In response, a number of people interested in the future of the course attended the meeting and several addressed the commissioners and Hazlehurst Mayor Bayne Stone with ideas and suggestions.
Stone opened the discussion by giving a brief history of the course, closing with a plea for commissioners and other city and county leaders to meet at the golf course Saturday morning to look at the course and brainstorm on how to save it.
The City Council recently agreed to try to lease the course but, after two months, if no one comes forward to lease it, the course will be closed.
But, as John Turner pointed out in the meeting, someone has already come forward in hopes of leasing the course but Mayor Stone won’t approve it.
Turner pointed out that personal conflicts have plagued the course management but the father-son duo of Mike Williams and Tyler Williams have stepped format and asked the mayor to let them take it over.
“Let them try it,” Turner said. “At least give them a chance.”
Turner pointed out that Tyler Williams is the high school golf course, his father is a hard worker and they have friends who want to work hard to make the course work.
Stone offered a rebuttal, criticizing the Williamses and complained about them being on the course with too many carts around a green.
Blake Mullis, whose father Pharr Mullis is a golf course manager in Douglas, echoed Turner’s comments, urging that the course remain open.
Rodney Thomas vowed his help, adding that he has the equipment to help keep up the course.
Stacey Adams was more direct in countering Stone’s comments saying that when the mayor saw six people playing in one group, he was a member of that group and there were no other golfers on the course. “He ran us off and he’s run more than us off,” Adams said.
He added that with the proper management, the course could succeed. “You need to get someone out there who knows how to run a golf course and not run everyone off,” he said.
City Council member John Ramay expressed his appreciation for the interest shown in the course, adding that the council had passed a motion to lease it, if not, in two months it will be closed. He said he would like to see the course kept open saying it would mean a lot to the community.
In other action at Tuesday’s meeting, the commissioners ….
…. heard from Tax Assessors Board Member David DeSousa who shared positive comments for the county’s state ratio study compared to other counties.
…. heard from Tommy Purser on the Georgia Open Record Act (see story elsewhere).
…. heard from Joint Development Authority/Chamber of Commerce executive director Laura Bloom who invited at lease one commissioner to attend an upcoming Board of Tourism-Chamber meeting to discuss collection of the hotel/motel tax.
…. agreed to advertise for a new member of the Recreation Department Board.
…. heard a report from County Administrator Heather Scott that only one bid was submitted on the Emergency Medical Services building. The commissioners agreed to approve the bid from Dixie Builders once the board was provided building plans and specifications.
…. heard from Commissioner Hank Hobbs who said the Solar Board had been continuing to meet but had not made any decisions.
…. heard an update from Road Department Supervisor Eddie Bush.
…. heard a financial update from Administrator Scott, who also asked that the September meeting be moved because she and County Clerk Jayme Crosby would be out of town attending training in Athens.
…. approved an agreement with the hospital proposed by County Attorney Andy Ramay.
…. fielded questions from Rhonda Walsh regarding the solar panel projects.
…. voted 3-2 to approve a motion from Chairman Ricky Crosby to use Local Maintenance and Improvement Grant funds to pave Yawn Road. Crosby, Brad Crews and James Benjamin voted in favor of the motion while Hobbs and Vann Wooten opposed it.
…. met in closed session to discuss personnel and litigation. 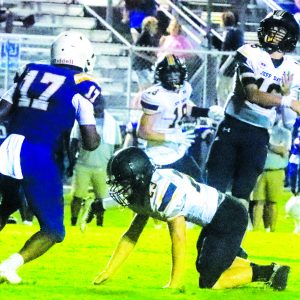