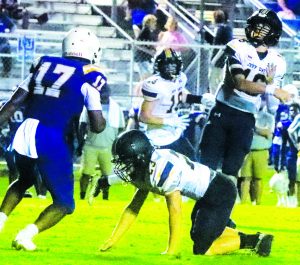 Jeff Davis High’s 2022 football season opens this Friday night in Hazlehurst when the Yellow Jackets host Class A power Charlton County.
The Jackets this season have the toughest schedule the school has faced in decades. The first four games of the season are against playoff teams from last season. The four posted a combined record of 42-11 and three of the teams reached the semifinals before losing.
The difficulty of the schedule was previewed last Friday night in Rochelle as Jeff Davis and Class A power Wilcox County, another semifinals team from last season, met for a preseason scrimmage.
Friday’s scrimmage opened with the jayvee teams playing in the first quarter. The No. 1 teams took the field for the second and third quarters, and the No. 2 squads faced off in the final quarter.
The second and third quarters were offensive showcases as the Yellow Jacket ground game produced four touchdowns and the Patriots used the prolific passing of their 4th-year starting quarterback, Abe Stowe, who severely tested the JD defensive secondary. Wilcox also scored four times. Stowe passed for over 2,000 yards last season as a junior as Wilcox won their region championship and reached the semifinals of the 2021 state playoffs. The Patriots, who were 10-4 last season, are ranked No. 3 in Class A, Division II this season.
This Friday night’s opponent, Charlton County, has a pre-season ranking of No. 7 in Class A, Division II. The Indians feature running back Jaylen Lilley who rushed for 1,431 yards last season as Charlton finished the season 7-4, losing 36-26 to Wilcox County in the first round of the playoffs.
Next week, things get even tougher for the Yellow Jackets as Class AAA power Pierce County comes to Hazlehurst. The Bears from Blackshear won the Class AAA state championship in 2020 and advanced to the semifinals last year. They dropped to Class AA this season and in preseason polls they are ranked No. 4. Senior quarterback/running back D.J. Bell has rushed for 3,408 yards in his career despite missing five games.
Blackshear, as Georgia Bulldogs fans know, is the home of quarterback Stetson Bennett who led Georgia to the national championship last season.
On Sept. 2, the Yellow Jackets hit the road to Swainsboro, the preseason No. 6 in Class A, Division I. The Tigers are no stranger to Jeff Davis as they were members of Region 2-AA last season along with Jeff Davis, winning the region championship. The Tigers finished the year 11-3 last season, advancing to the state semifinals before falling to eventual state champion Fitzgerald. Quarterback Ty Adams, who is committed to East Carolina, rushed for 1,778 yards and passed for 451 last season.
On Sept. 9, the Jackets go on the road again, this time to Metter, the preseason No. 5 in Class A, Division I. The Tigers posted 13-1 records the last two seasons, reaching the Class A Public semifinals both years, each time losing to the eventual state champions. They’s held 20 of 28 opponents to a touchdown or less in that time.
After that bruising 4-game start, the Yellow Jackets get an open date on Sept. 16 to prepare for the first of six Region 1-AA games. The region opener will be Sept. 23 when the Cook High School Hornets visit Hazlehurst, the fifth straight game for the Yellow Jackets against 2021 playoff teams. The Hornets were 5-5 and finished third in Region 1-AA last season, falling to Northeast, Macon in the first round of the playoffs.
The Sept. 30 trip to Nashville to face Berrien High School will mark the first time the Jackets face a team that did not make the playoffs last season. The Rebels were 4-6 last season, finishing tied for the bottom of Region 1-AA with a 1-4 record.
On Oct. 7, the Yellow Jackets host another playoff team from last season, Dodge County. The Indians were 7-4 last season, falling in the first round of the playoffs to eventual state champion Fitzgerald.
On Oct. 14, Jeff Davis travels to Fitzgerald to take on the defending Class AA state champion Purple Hurricanes. Fitzgerald, the preseason No. 2 team, returns about half of its starters from last year. All State linebacker Daniel James and offensive lineman Xavier Walker may be the Hurricanes’ best two players.
The Jackets finish the season with an Oct. 21 home game against Worth County, 4-6 last season, and after an Oct. 28 open date, they travel to Americus to face Sumter County which dropped down from Class AAA last season where they finished with a 1-8 record.