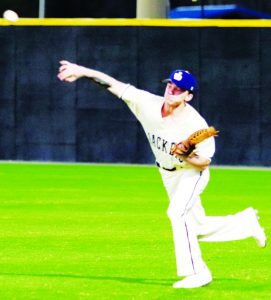 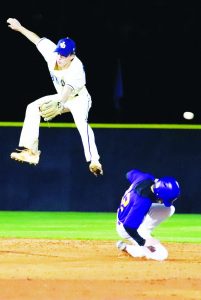 Hayden Turner hit a walk-off double to center to break a 3-3 tie and give Jeff Davis a 4-3 win over Wayne County Thursday in Hazlehurst.
But the Jackets dropped two games during the week, falling 4-1 to visiting Bleckley County last Tuesday and dropping a 10-3 home game to Lee County Saturday.
The Jackets couldn’t get the hits they needed against Bleckley County while the visiting Royals got the timely hits as all four of their runs were unearned. Both teams had six hits and left eight runners stranded.
The Jackets’ lone run came in the third as Cason Clance and Kade Harpe led off the inning with back-to-back singles with Clance scoring on a wild pitch. JD had two other runners on in the inning with walks but a double play and a ground out ended the inning.
Harpe led the offense with two singles, Ethan Griffin doubled, and Alex Mason, Hayden Turner and Clance each singled.
Duke Stone started on the mound and pitched three innings. He blanked Bleckley the first two innings but gave up three unearned runs in the third. He gave up three hits, walked two and struck out six. Cason Clance pitched three innings, giving up an unearned run on three hits, walking two and striking out four. Hayden Turner pitched the final inning, giving up no runs on no hits, walking two and striking out two.
Catcher Matthew Glass helped out Turner as he caught the runner at first straying too far off the bag and threw him out.
Against Wayne County, the Jackets were cruising along with a 3-0 lead entering the final inning when the Jackets from Wayne County tied the game on a bases-loaded double.
In the bottom of the inning, Glass drew a one-out walk, advanced to second on a passed ball and took third on an Alex Mason ground-out. Turner then stepped to the plate and drilled a first-pitch line drive to deep center to score Glass and win the game.
The game was a scoreless tie until the fifth when Ethan Picanso led off the inning reaching on an error. Cason Clance sacrificed Picanso to second, Harpe doubled and Picanso scored as Trenton Clance was safe on an error.
A 2-out rally in the sixth upped the score to 3-0. Turner got a 1-out a single, went to second on a passed ball and, an out later, Cason Clance was safe on a dropped third strike as Turner took third. He scored on a passed ball.
Turner’s double, single and game-winning RBI led the offense. Harpe again had a pair of singles and drove in a run, Stone and Glass both singled, and Trenton Clance had an RBI.
Josh Griffin had a strong, 4-inning start on the mound, holding Wayne hitless, walking three and fanning six. Carter Mullis pitched two innings, blanking Wayne on two hits, one hit batter, no walks and three strikeouts. Mason pitched the final inning, giving up three unearned runs on one hit, three walks and three strikeouts.
The Yellow Jackets took it on the chin Saturday as Lee County rolled to a 10-3 victory.
The visitors jumped out to a 7-0 lead before the Jackets scored a single run in the fourth. The Trojans led by as many as nine runs at 10-1 and Jeff Davis scored single runs in the fifth and sixth to account for the final score.
The Jackets’ first run came as Ethan Griffin walked, Matthew Glass singled and Duke Stone reached on an error as Griffin scored.
In the fifth, Hayden Turner and Carter Mullis got back-to-back singles with one out. Griffin then walked to load the bases and Alex Mason hit a sacrifice fly to center to score pinch runner Jude Worthington.
The final run came in the sixth as Harpe got a 2-out walk, Kamden Munsayac singled as Harpe advanced to third and then scored on an error.
Glass led JD at the plate with a pair of singles. Munsayac, Turner and Mullis each singled and Mason had a sac fly RBI.
Freshman Andrew White started on the mound and went two innings. He gave up three earned runs on two hits, walked five, and struck out two. Mullis threw two innings, giving up two earned runs on four hits, walking two, hitting one and striking out two.
Turner also threw two innings, blanking Lee on no hits. He walked three and struck out three. Cason Clance pitched the final inning, retiring all three batters he faced, two by strikeout.
The Jacket defense turned the game’s only double play as Cason Clance caught a fly and threw to Eli Saunders to get out the runner at second.
Score by innings:
WCHS 0 0 0 0 0 0 3 -3
JDHS 0 0 0 0 1 2 1 -4