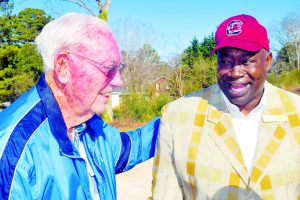 Former Jeff Davis High School football coach and Jeff Davis High graduate Royce Cecil Morris died Jan. 5 at the age of 84.
Coach Morris was a native of Jeff Davis County and grew up in Hazlehurst where he was a standout football player for Jeff Davis High in the late 1950s, earning a football scholarship and playing at the collegiate level.
After serving as an assistant and head coach at JDHS, Coach Morris went on to build statewide admiration for his coaching during his 20-year career at Duluth High School (1970-1990). At Duluth he coached George Rogers who went on to become an All-American running back at the University of South Carolina and winning the 1980 Heisman Trophy. According to Gwinnett Daily Post online Gwinnett Prep Sports, Coach Morris was one of the most successful head football coaches in Gwinnett history. He is the all-time wins leader at Duluth, where the field at the high school stadium is named in his honor. He went 150-82-7 and won seven region championships as the Wildcats’ head coach from 1970-1990, and won 163 games overall.
“(Morris) was just a good guy, not only a good coach, but he looked after people,” said Bill Knox, a 1976 Duluth graduate who played football for Morris. “In my four years there, we played for two state championships. … He was a father figure to a lot of us, just a good guy. I really enjoyed my time playing for him. He put Duluth on the map for football. There wasn’t much before that.”
“If it wasn’t for him, I would be back in Atlanta, a nobody,” said Rogers, who now works for South Carolina. “He helped me out a lot. He showed me the way to start earning my grades, getting my grades, doing what I was supposed to do so I could play football. … He was a great man. He helped so many people, people of color at Duluth High School. He turned them around and had them going in the right direction. He will be awfully missed. I miss him already.”
The Touchdown Club of Gwinnett presents the Cecil Morris Award annually to an all-county caliber player whose season was cut short by injury.
“Coach Morris was so much more than just your football coach, he genuinely got to know every member on the team, their family situation and showed care for your contributions to society after graduation,” said Erik Richards, one of Morris’ former players who is now selection committee recruiting coordinator for the All-American Bowl. “I got to see him on both ends when we made state championship runs in ’80 and ’83, and when we didn’t even qualify for the playoffs in ’81 and ’82. He was the same mentor all the way, though. He was a large part of why I made football my passion and eventually my career.”
After retiring at Duluth High School he moved to South Carolina and served as an assistant coach to his son, then the head coach at Socastee High School in Myrtle Beach, S.C.
He is survived by his wife, Nancy Morris of Cumming; sons and daughters-in-law, Matt and Cindy Morris, of Duluth, Michael and Christine Morris of Moore, S.C.; daughter and son-in-law, Becky and Kenny Kinsey of Cumming; brother and sister-in-law, Rayburn and Joyce Morris of Tallujah Falls; six grandchildren.
For more information, see the obituary page.