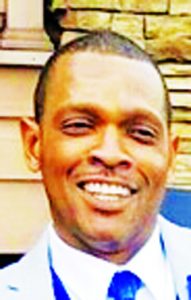 Dr. Joseph Dewayne Handsome (affectionately known as Joe), 47, of Cornelius, passed away in Cornelius, N.C. He peacefully departed this life Jan. 13.
Joseph was born on Dec. 31, 1974, to the late Rufus Handsome Jr. and Rietta Mae Handsome in Hazlehurst. Joseph attended Jeff Davis High School and attended Bennett Tabernacle. As a student at Jeff Davis High School, Joseph participated and was honored as a star athlete in basketball, for which he received a scholarship from Albany State University in 1993, and he was an excellent student throughout his scholastic career. As a young but great father, he had the joy of bringing his daughter Kiara into this world in 1993.
Joseph earned his Bachelor’s of Science Degree in Education from Valdosta State University in 1997, his Master of Science in Computer Information Systems from University of Phoenix in 2005, and his Ph.D., Doctor of Philosophy and Information Systems from Walden University in 2009. He earned his private pilot license from the FAA/Federal Aviation Administration in 2014, and has been an active member of the AOPA/Aircraft Owners and Pilots Association since 2014. Joseph served as a Board Member for Della School of Coding and Design in Columbus, Ohio, one of the best STEM (Science, Technology, Engineering and Math) schools in Ohio. Joseph helped implement coding into the school’s curriculum. After leaving Hazlehurst, he relocated to the DMV area and resided in the Prince George’s County area of Maryland for over 20 years. In 2015 he relocated to Charlotte, N.C., where he met his current wife Levon, and shortly afterwards married her and built a life together in Charlotte and Cornelius, NC. This life included laughter, lessons, great food, growth, travel across the globe, plane building, soap creating, business building, and love. Joe’s personal attachment to skincare led him to make his own soap. His wife later expanded this idea into a business. That business today is Joe-Le Soap.
After graduating from college, Joe began a career in teaching in Prince George’s County, and then transitioned into Information Systems as a Network Engineer/Info Systems Analyst at Lockheed Martin, and then Associate Director of Operations at AT&T for 22 years. He was a mentor, a coach, a teacher, and friend to all. He was the jack of all trades. Joseph simply put, was brilliant.
Joe was a very special, creative, bright, intelligent, and loyal individual. He loved his wife, he loved his dog Powder, he loved and respected his mother, he was faithful and loyal to his siblings, he loved his family, he constantly made reference to his late father, and he absolutely adored his daughter. He often made tough situations more bearable by relating them to his wisdom and life lessons. Joe used his carpentry skills passed down from his late father, to help not only his wife around the house, but friends, neighbors, or anyone in need. Joe built with his bare hands, an experimental, FAA approved and certified Wittman Tailwind W10 private plane. Joe registered his private plane, his pride and joy, under N52816 commemorating the day he met his wife Levon in Charlotte, his other pride and joy. Joe also custom built a plywood boat that he enjoyed riding around Lake Norman. He was an avid cook and loved to share his culinary talent, a skill developed early on from watching the Food Network as a child in his parent’s home. Quick to jump up from the table and re-create his own cuisine if it wasn’t to his liking. Joe was an absolute perfectionist. He took pride in everything he did and expected the same from his close circle. He was very loyal and took care of those he loved. He showed his love more-so than verbalizing with random acts of kindness. He was very observant and had an art of just giving you what you needed. Joe had a sense of humor from out of this world that could only be attributed to his late father, and provided non-stop entertainment to those who knew him. He was straight-forward and unfiltered, but honest. His friends adored him, respected him, and appreciated his brutal honesty. Joe was a true leader.
Dr. Handsome leaves a legacy of love to his beloved wife, Levon S. Handsome; daughter Kiara S. Handsome; mother Rietta Mae Handsome; late father Rufus Handsome Jr; grandmother Queenell Pierce, late grandfather Grady Lee Pierce, late grandfather Rufus Handsome Sr, late grandmother Sally Handsome; siblings – Geraline Handsome, Valentino Handsome, Rufus (Sharon) Handsome III, Dr. Cassandra Handsome, Prophet Ronald (Terica) Handsome, and Willie (Quantisha) Handsome; mother-in-law Emma Eversley; father-in-law Kwame Osei Moyo; stepfather-in-law Bentley Eversley; brother-in-law Thomas C. Saunders IV
His funeral was held Jan. 29 at Bennett Tabernacle Holiness Church, Hazlehurst.
A memorial service was held on Feb. 5 at Harvey B. Gantt Center in Charlotte, N.C.
King Brothers Funeral Home, Hazlehurst, was in charge.