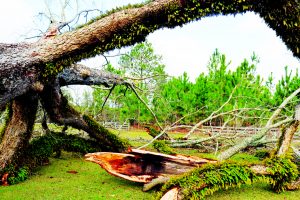 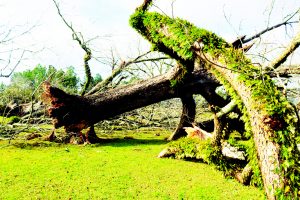 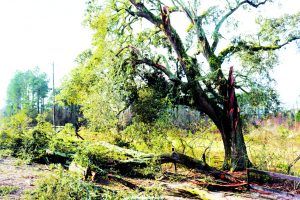 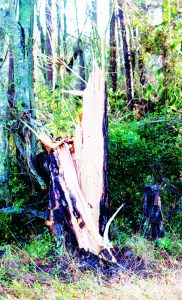 Jeff Davis Emergency Management Agency (EMA) Director Charles Wasdin didn’t expect it.
The National Weather Service (NWS) office in Jacksonville didn’t expect it.
But the National Weather Service office in Peachtree City did expect it.
“It” was last Thursday evening’s tornado that ripped across southern and eastern Jeff Davis County, doing extensive damage in some areas.
Wasdin said Tuesday morning that, according to a National Weather Service survey team that visited Hazlehurst after the storm, there were actually two serious weather events Thursday. The first event happened when 70-80 mph straight line winds did damage in the Roper area, toppling trees, damaging buildings, and hurling unsecured property across the area. Shortly after that, a tornado touched down in an area south of Denton and traveled 11.9 miles, eventually crossing the Alma Highway in the eastern corner of the county.
The tornado, Wasdin said, didn’t stay on the ground the entire 11.9 miles. Wasdin and other EMA employees witnessed the tornado and followed it as it tore its path of destruction in the area. Dustin Atkinson and Lloyd Dyal traveled parallel to the tornado and said it would repeatedly touch down and then retreat toward the clouds.
When Wasdin first went to Roper to document the damage there, he received a call from the Jacksonville NWS telling him radar had revealed a tornado event in the county.
“Yeah, I know, I’m looking at the damage,” Wasdin replied.
When the NWS caller said the tornado was south of Denton, Wasdin realized there were two events: first the straight line winds in Roper and then the tornado touched down south of Denton. That early warning of the tornado enabled EMA workers on the ground to follow the storm’s path.
That turned out to be fortunate as, when Dyal reached the Alma Highway, he stopped several vehicles on the road and they watched as the tornado crossed the road ahead of them. Had Dyal not stopped them, those vehicles could have been caught in the tornado’s winds.
The NWS survey team told Wasdin the most intense part of the tornado was at the Jimmy Scott property between Highway 221 and Bell Telephone Road.
“The tornado essentially blew his barn apart,” Wasdin said, adding that it also overturned an irrigation system at the farm.
“It was an EF1 tornado there,” Wasdin said, referring to the Enhanced Fujita Scale used to gauge the damage done by a tornado. “It was a high EF1, meaning it was almost an EF2.”
The Scotts were at home at the time the tornado struck their barn, Wasdin said, and they had huddled under a staircase for safety.
Wasdin added that the width of the tornado got as large as 300 yards and was 150 yards wide during most of its journey on the ground.
Atkinson, who lives just past the Roper-Elizabeth Baptist Church intersection, told Wasdin the winds ripped up his dog pen and took away a trampoline. Part of the debris was found in a pond down the road from Atkinson’s home.
After Thursday’s destructive weather, Watson was extremely concerned when Sunday’s windy, stormy weather swept through the county. Sunday, unlike Thursday, Wasdin was expecting damaging weather. But it never materialized.