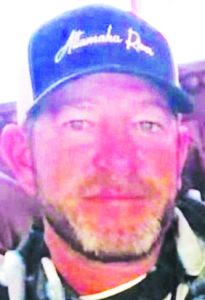 In loving memory of James Randall Watson, 45, of Hazlehurst, who passed away Jan. 5 at Jeff Davis Hospital.
Mr. Watson was born in Naples, Fla., March 27, 1976, but had lived in Jeff Davis County most of his life. He is preceded in death by his brother, Glen Ridder Jr. He was a construction worker and attended Hazlehurst Church of God. Jamie was a hard worker with a big heart and sense of humor. In his spare time he loved to fish, watch football and lend a hand to his family and friends. He had a huge passion for animals and will be sadly missed by all who knew and loved him.
He was a “Good man gone to soon.”
Survivors include his fiancé, Shaila Ellis of Hazlehurst; mother, Frankie Braman of Daytona Beach, Gla.; father, Randall Watson of Florida; stepfathers, Mark Phillips of Hazlehurst and Wayne Stapleton of Lumber City; step-mother, Debbie Phillips of Hazlehurst; brothers, David Vance of Daytona, Fla., and Michael Mincey of Hazlehurst; sisters, Barbara Salyer of Eastman and Victoria Phillips of Hazlehurst; special uncle, Dick Mitchell of Rhine; a host of nieces and nephews.
Wainright-Parlor Funeral Home is in charge.