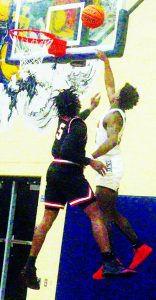 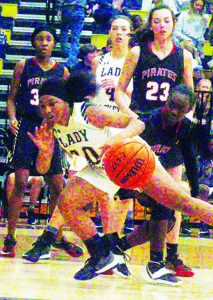 Jeff Davis High’s girls basketball team got its first win of the season Saturday, downing visiting Appling County 52-47.
The Jacket boys won their fourth straight game, topping the Pirates 68-60 to up their record to 4-1.
Last Tuesday, the teams hosted Toombs County for a region encounter with the Lady Bulldogs winning 45-42 while the JD boys took a 65-51 victory.
Autumn Rhodes led the Lady Jackets against Toombs County with 19 points, but only three other Lady Jackets scored. Jekiyah Smith joined Rhodes in double figures with 10 points, Morgan Yearty had nine and Jasmin McNeely added four, including a 3-pt. shot.
Jeff Davis rallied from a 23-16 halftime deficit to outscore Toombs 17-6 in the third quarter to take a 33-29 lead. But the Lady Bulldogs battled back in the final quarter behind the scoring of KayKay Mobley to pull out the win.
Mobley finished the evening with 15 points and Ziahya Griffin had 14.
In Saturday night’s game, Appling led 23-20 at intermission but in the third quarter, the Jeff Davis defense held the Lady Pirates to a single free throw and the Lady Jackets led 34-24 entering the fourth quarter. This time there would be no comeback as Yearty calmly sank 6-of-6 free throws to hold Appling at bay.
Yearty finished with 20 points and was 10-of-12 from the charity stripe. Smith, who was 10-of-14 on free throws, had 16 points, Tia Cornish 10 and Rhodes six.
The Lady Jackets made good on 26-of-36 free throws for the game.
Raniyah Jones topped Appling with 13, Ke’niyah White had 11 and Kiyia Williams had 10.
The boys’ win over Toombs was more lopsided than the final score indicates. The Jackets led 54-36 after three stanzas and Coach Bo Boatright was able to give his bench some playing time in the fourth quarter.
Bran Swain led four Jackets in double digits with 16 points. Mike Dotson had 14, Brandon Sturgis 13, C.J. Parker 10, Ahmad Clements 9, and Malachi Smith 3. Clements and Swain both hit a pair of 3-pt. shots and Smith had one.
Brantley Upshaw topped Toombs with 18 and Dominic Eason had 12.
Saturday night, the Appling boys led by as many as 8 points in the first quarter but over the next two quarters, the hosts out-scored the Pirates 44-24 to propel them to the 68-60 win.
Swain again led the scoring with 20 and he got strong support from Clements with 18 and Dotson with 17.
Clements had four 3-pt. shots including three in the second quarter as the Jackets moved from a 17-12 first quarter deficit to a 35-30 halftime advantage. Dotson’s eight points in the final quarter helped hold off an Appling rally.
Sturgis added five points, Parker had six and Elijah Phillips had two.
Buzzy Thorp was the only Pirate in double figures as he led all scorers with 26.
Score by quarters:
Girls
TCHS 8 15 6 16 -45
JDHS 9 7 17 9 -42