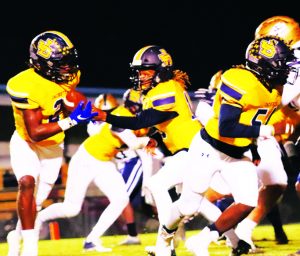 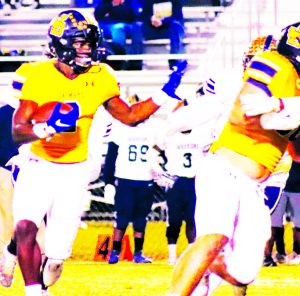 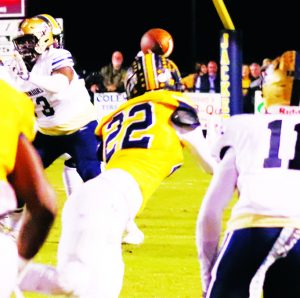 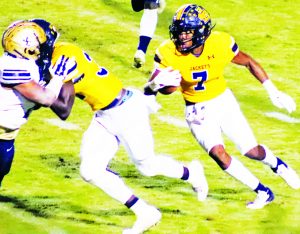 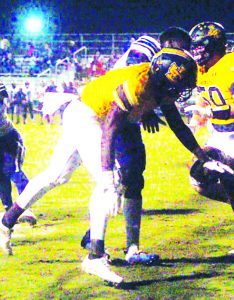 This block tore the helmet off a Jefferson County player 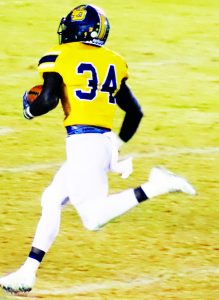 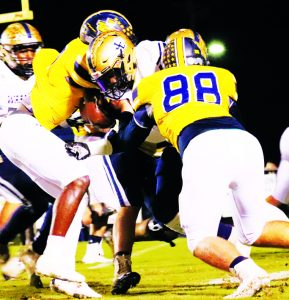 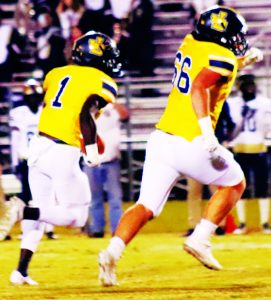 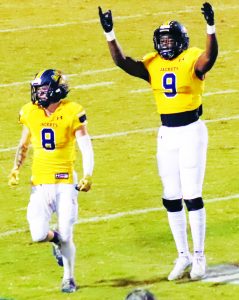 Jeff Davis High rolled to a 40-0 win over visiting Jefferson County Friday night to advance to the second round of the 2021 Class 2A football playoffs.
This week, the Jackets, 10-1, travel to far north Georgia to take on No. 1 ranked Rabun County in Tiger. The Wildcats are also 10-1, having won 10 straight games after a season opening loss to Class 4A Jefferson 22-13.
Rabun County has the No. 1 scoring offense in Class 2A, while the Jackets have the No. 1 scoring defense in the classification, making for an interesting 2nd round matchup.
On their first possession, Jefferson County used a 20-yd. pass completion to get a first down at midfield. But that was all the Warriors could do as a holding penalty, Terrance Clemons’ near interception, and Miyon Conaway’s sack left Jefferson facing 4th-and-32 and they punted the ball away.
The punt went only 10 yards and the Jackets were in business at the Jefferson 49.
After a 5-yd. penalty, Aahiyus Allen picked up 8 and Kiyon Dotson got 8 more. After another 5-yd walk, Michael Dotson went around the left side for 16 yards, Allen got 5 and then Kiyon Dotson scored from 24 yards out behind perfect blocking.
Angel Mendez kicked the extra point and the Jackets led 7-0.
After the kickoff, Conaway foiled Jefferson’s next play from his defensive end position and then Carter Mullis made a diving interception and the Jackets had the ball at the Warrior 30.
JD’s C.J. Parker proved illusive on the first play after the turnover as he sidestepped a number of tacklers before finally being run out of bounds at the 10. Allen covered the distance in two carries and Mendez made it 14-0, still in the first quarter.
The Jackets’ next possession started at their own 8. They moved the ball to the Warrior 49 in 7 plays but then stalled and Jefferson County took over at their 49 after a fake punt failed to pick up the first down.
The Jacket defense proved to be impenetrable and, going for it on 4th-and-4, the Warriors tried a deep pass but Michael Dotson picked it off. Dotson followed his blocking and outran everyone to the end zone for an 80-yd. return. But a penalty nullified the score and JD took over at their 21.
After Allen got 6, Kiyon Dotson darted through a gaping hole carved out by the offensive line and turned on the afterburners for a 73-yd. touchdown. The P.A.T. failed but Jeff Davis led 20-0.
On the ensuing kickoff, Kade Harpe stripped the ball from the return man and the Jackets recovered on the Jefferson County 26.
On 4th-and-3 the Jackets went for it but a penalty nullified a first down. On 4th-and-13 from the 29, Parker took the ball around the left side on a reverse, directed the blocking, and cut off a Tyson Alls block, carrying the ball to the 11.
Then Allen took a direct snap and scored on the next play, but another penalty pushed the Jackets back to the 16. Allen was called on again, dashing through a big hole and seemingly stopped at the 8. But suddenly he broke through the scrum and scored standing up.
Again the P.A.T. was no good and the Jackets held a 26-0 lead at intermission.
The Jackets offense sputtered a bit on their first possession of the second half. Harpe punted the ball away, the receiver muffed the ball and the Jackets recovered at the Jefferson County 16. Michael Dotson got 3, Kiyon Dotson bulled his way to the 6, Allen moved the ball to the 5 and Kyrese Hunt then carried the ball into the end zone.
Mendez kicked the extra point to make it 33-0.
The Jackets next possession started at their 22. On the first play, Parker put on a running clinic as he followed his blocking perfectly, zigzagging down the field, leaping over a would-be tackler and racing 78 yards for the score.
Mendez kicked the extra point and the Jackets had a 40-0 lead.
With the mercy clock running the remainder of the game, the Jacket bench got in a lot of valuable playing time.