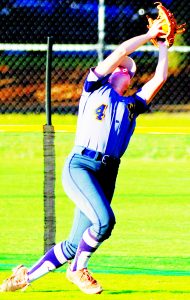 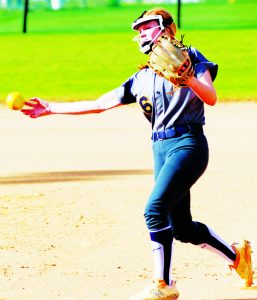 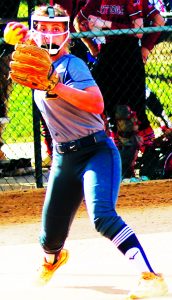 Jaci Underwood throws out a runner 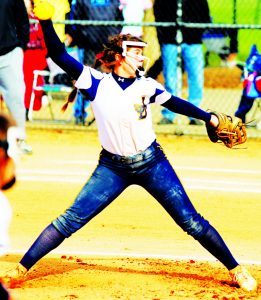 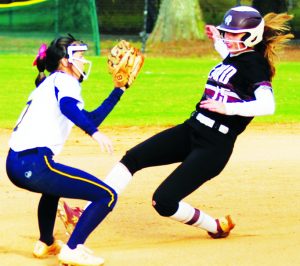 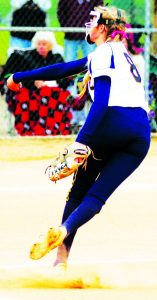 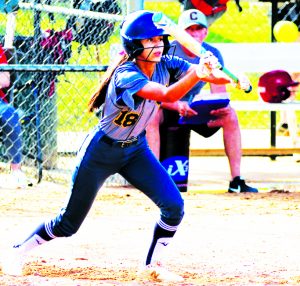 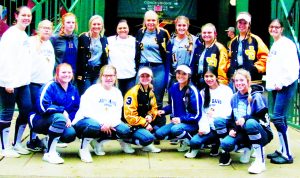 Jeff Davis High’s softball team’s dream of winning a state championship came to an end last week in the Georgia High School Association Elite 8 Tournament in Columbus.
The Lady Jackets won their opening game in the double-elimination tournament, blasting Chattooga 11-1. In the second game, defending state champion Heard County rolled to an 11-0 victory over the Lady Jackets and, in JD’s first game in the losers bracket, Region 2-AA nemesis Vidalia took a 2-1 win.
Heard went on to capture its second straight Class 2A championship, beating Vidalia 10-6 in the finals. Heard dominated the tournament, outscoring their first three opponents 31-1 before their closer, 10-6 victory over Vidalia. Vidalia lost its opening game to Bremen then fought back through the losers bracket to make the finals.
The Lady Jackets finished the season with a 26-8 record.
Jeff Davis got off to a quick start against Chattooga with a 3-run first inning. The Lady Jackets scored in every inning to win 11-1 in five innings.
The first inning outburst was a 2-out rally as the first two JD batters went down. Jaci Underwood then doubled, Malleigh Burns walked and Alicia Lilliott, the only Jeff Davis senior, singled to score Underwood. Annalese Poole followed with a 2-run double to make it 3-0.
In the second, Bentlee Metts, Jenna Miles and Ella Wood singled to load the bases with one out. Metts scored on an error but that was the only run the Lady Jackets could muster.
In the third, Jeff Davis staged another 2-out rally. Kalleigh Sellers started things with a solo homer over the center field fence. Metts and Laisha Hernandez got back-to-back singles and Miles tripled to drive in two runs, making it 7-0.
In the fourth, with Burns on first with a single and two outs, Sellers singled and Metts drilled a run-scoring double to make it 8-0. Hernandez then singled to score Sellers but Metts was thrown out at the plate.
A lead-off home run in the bottom of the inning was the Lady Indians first hit of the game and got them on the scoreboard. A hit batter, a single and a walk loaded the bases with no one out. But then pitcher Kelsey Parlor tightened up and struck out the side to end the inning with the bases loaded.
In the fifth, Wood singled and Underwood followed with a line drive, 2-run homer to right to make it 11-1.
Metts topped the Lady Jackets at the plate with two singles, a double and an RBI. Underwood doubled and homered and drove in two runs, Miles had a single, a triple and two RBI, Sellers homered and singled and drove in one run, Hernandez had a pair of singles and an RBI, Wood singled twice, Poole had a double and two RBI, Lilliott had a single and an RBI and Burns singled.
Parlor went the distance on the mound, giving up one run on three hits, hitting one, walking four and striking out six.
Heard County proved to be a formidable foe as the Lady Braves banged out 10 hits while the Lady Jacket defense committed an uncharacteristic four errors, and three of Heard’s runs came on bases-loaded walks.
Jeff Davis had its chances to score but couldn’t come up with hits at key moments.
In the first, Miles and Underwood singled and JD had runners at first and third with only one out, but Underwood was caught stealing and the next batter grounded out.
Underwood started the fourth with a lead-off double, but the next three batters were retired and she was left stranded at second.
Jeff Davis loaded the bases with no one out in the seventh on pair of walks and a Heard error. But a line-out/throw-out double play and a ground out ended the inning.
Underwood’s single and double led the hitting with Miles and Wood adding singles.
Parlor took the loss, going 6 1/3 innings, giving up six earned runs on nine hits, uncharacteristically walking seven batters, and striking out nine.
Friday’s final game was a pitchers duel with Parlor and Vidalia pitchers Tymber Harris and Bailey Holland throwing a 3-hitter.
Parlor was cruising along with a 1-hit shutout and a 1-0 lead through four innings when tragedy struck. With one out, Parlor hit a Vidalia runner on the second pitch of the at-bat and then the Lady Indians’ No. 8 hitter, Madison Starr, hit a 2-run homer that turned out to be the game-winning hit.
JD took the lead in the bottom of the first inning as Miles walked, went to second on a Wood groundout, took third on Underwood’s single and scored on a Burns single. After Miles’ score, the Lady Jackets still had two runners on with only one out but they couldn’t get another run across the plate.
Walks in the second and third innings gave Jeff Davis baserunners, and Lilliott singled in the sixth, but that was all the baserunners they would get for the remainder of the game.
Underwood, Burns and Lilliott got the Jackets’ only hits, all singles, and Burns had an RBI.
Parlor pitched seven innings, giving up two runs on three hits, walking one, hitting one and striking out six.
Vidalia’s Holland pitched the final six innings, striking out 10, including striking out the side in the final inning on just 11 pitches.
Score by innings:
JDHS 3 1 3 2 2 -11
CHS 0 0 0 1 0 – 1