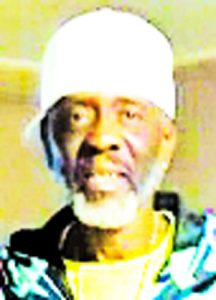 Services for Mr. Rodney Demetrus Wooten, 52, who died Oct. 21, were held at King Brothers Funeral Home in Hazlehurst Oct. 30 with Pastor Michael Fedrick officiating. Special singing was by The Perry Family. Burial was private.
Mr. Wooten, known to many as “Demetrus,” was born March 19, 1969. He was the owner and operator of Wooten’s Car Care. He was a father who enjoyed his family and friends. Some of his favorite pastimes were washing cars, spending time with his fiance, kids and grandkids, cousins/friends, and nieces and nephews. Demetrus was a simple person who touched the lives of many people. He attended Appling County Schools where he developed his love for joking, laughing, imitating others, and making up names for people even though he knew their real names.
Demetrus was preceded in death by his parents Bobby Lee Wooten and Jannie Lee Reynolds and his brother Bobby Dewayne Wooten.
Survivors include daughters Erica McKenzie (DJ, Sr), of Baxley and Nykia Wooten of Hazlehurst; son Nyjah Wooten of Clearwater, Fla.; fiance Cynthia Lewis of Baxley; grandchildren Danthony (DJ) Jordan Jr., and Demery Jordan both of Baxley; sisters Brenda (Chorice) Harris and Sherry Green, both of Baxley; Brother Timothy Wooten (Angel) of Hinesville; nieces, LaShalla Wooten and Sheniquel Graham (Devan), both of Baxley, Kiara Weatherspoon and Taisha Wooten both of Valdosta; nephews Derek Benjamin of Columbia, S.C., and Jeremy Green of Baxley; great-nieces, MaKayla, Tiana, and Andrea Wooten, Aaliyerah Rankin, Lauryn Spearmon all of Baxley, Heavenly Weatherspoon, of Valdosta; and great-nephews, Tristian Wooten and Zion Lee of Baxley, and Kaden and Braden Wooten of Valdosta; and a host of aunts, uncles, cousins, and friends.
King Brothers Funeral Home was in charge.