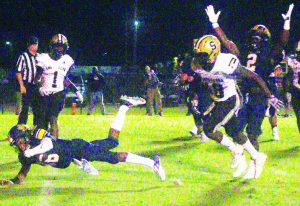 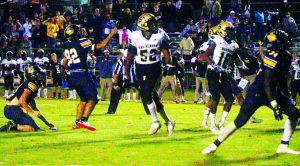 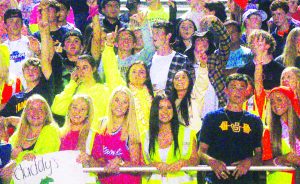 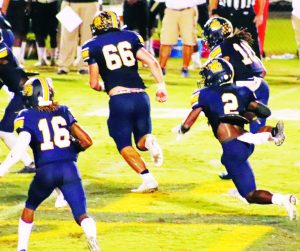 Swainsboro High’s football team came to Hazlehurst last Friday night, taking a 15-14 victory to end Jeff Davis High’s 8-game unbeaten streak and all but dash the Jackets’ hopes for a region championship.
The Tigers are now 3-0 in Region 2-AA with a game on the road against Toombs County and a home contest against Vidalia left on their schedule. For the Jackets to win the title, they must beat East Laurens this week in East Laurens and Swainsboro would have to lose its final two games.
Friday’s game pitted two of the best Class 2-A defensive units in the state. Going into the contest, the Jackets were giving up a Class 2-A state-leading 5.6 points per game while Swainsboro was not far behind, giving up 11 per game.
The Tigers’ offense consisted of little more than quarterback keepers, with a handful of handoffs in the mix. Swainsboro junior Ty Adams was the workhorse for the visitors, taking the snap and keeping 25 times, scoring both Tiger touchdowns and their 2-pt. conversion.
A 12-yd. Adams pickup on the first play from scrimmage gave Swainsboro a quick first down. But defensive end Miyon Connaway came up with a big defensive effort and then, on 3rd-and-1 from the Jacket 46, Kade Harpe and Tre Chandler stopped the runner for a 3-yd. loss and the Tigers had to punt the ball away.
After a pair of 3-and-outs, the Jackets started at their 31 to begin an 11-play series that reached the Tiger 8 yard line. But then things turned sour. Two running plays lost three yards for a 4th-and-7 from the nine. The Tigers then were flagged for two straight encroachment penalties making it 4th-and-1 from the two. The Jackets went for it but came up short and Swainsboro took over at their own seven.
The Jackets first scoring possession began at the JD 36. On 3rd-and-nine, Tyson Alls hit Aahiyus Allen at the 50 and the senior running back evaded tacklers, taking the ball all the way to the Swainsboro seven before being caught from behind. Alls kept around the left side on the next play, evading a tackler at the five and falling into the end zone for the score. Angel Mendez kicked the extra point and the Jackets led 7-0.
Swainsboro got off two plays as the first half came to an end.
Swainsboro wasted no time getting the lead in the third quarter as, starting at their own 40, a 60-yd. Adams jaunt got the Tigers within 7-6.
A penalty on the P.A.T. kick moved the ball to the 1 1/2 and Adams went for two, making it good and giving Swainsboro an 8-7 lead.
The Yellow Jackets came right back, rolling 70 yards in six plays to get the lead back. Alls was 2-for-2 passing in the drive, hitting Michael Dotson and C.J. Parker for eight and three yards. Kiyon Dotson had a 23-yd. run through a huge hole carved out by the Jacket offensive line. From the Tiger 30, Parker took a handoff around the right side, pulled up and threw a strike to Allen who had gotten behind the secondary for the score.
Mendez kicked the extra point and JD led 14-8 early in the fourth quarter.
On their next possession, the Jackets marched from their 32 to the Swainsboro 32 in six plays. But after a Kiyon Dotson got one, the Jackets were penalized for a false start. Alls then kept for 10 yards to make it 3rd-and-4 from the 30. But another false start pushed the ball back and the Jackets couldn’t recover.
Swainsboro began its game-winning drive at their own five yard line. It took them 16-time consuming plays, scoring with little time left on the scoreboard. The score came on a 4th-and-goal from the two as the Jacket defense made a valiant goal line stand. Swainsboro scored on a 2-yd. quarterback keeper with Adams barely getting into the end zone around the right side.
On the kickoff, rather than kicking deep, the Tiger kicker booted the ball short and the Jackets were in business at their 48 with little time left on the clock.
On the first play, Alls hit Parker on the right side and Parker flicked the ball back to Kyrese Hunt who carried all the way to the Swainsboro 31 for a 21-yd. pickup. Alls kept for six, getting out of bounds to stop the clock. Alls then hit Parker on the sidelines for 5-yds., again stopping the clock. Allen picked up five, again getting out of bounds and the Jackets were at the 15. Alls was sacked for a 5-yd. loss but, again, he was able to get out of bounds.
Kiyon Dotson took the ball off his left tackle and bulled his way all the way to the 10 for a first down. After a run got nothing, Coach Lance Helton called time out to line up for a field goal attempt with time almost gone.
Mendez’ 27-yd. field goal attempt sailed to the right and the Tigers took over, kneeling on the ball to run off the final seconds on the clock.