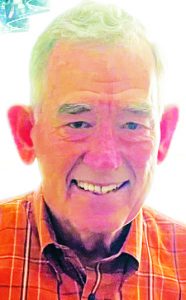 Mr. Ralph Lamar Walters, 73, of Hazlehurst died Oct. 21 at his residence.
Mr. Walters was born March 1, 1948, in Duval County, Fla. He was preceded in death by his father, Marcellus Colson Walters. He was the owner/operator of Barbara’s Blueberries. He was a former Deputy with the Pinellas County Sheriff’s Department, owner and operator of Walters Upholstery, formerly employed with ERO and Lassiter Implement John Deere. He was a member of Southside Baptist Church where he served as a Sunday School teacher and as the head on the maintenance and security teams, and as lead usher. He will be sadly missed by all that knew and loved him.
Survivors include his wife of 53 years, Barbara Walters of Hazlehurst; daughters and sons-in-law, Deborah Ann and Frank Pontone of St. Petersburg, Fla., and Nichole Michelle and Shawn Taillon of Beebe, Ariz.; mother, Ruth Underwood Atwood, of Lakeland, Fla.; brothers and sister-in-law, Melvin James and Brenda Walters of Hazlehurst and Marcellus Colson Walters Jr. of Texas; sister Janiece Campbell of Colorodo Springs, Colo.; and grandchildren, Haleigh, Sara, Zane, and Andrew.
Services were held Oct. 25 at Southside Baptist Church with the Rev. Deek Dubberly officiating. Interment followed in Union Springs Baptist Church Cemetery.
Active pallbearers were Jeff Moore, Shawn Taillon, Brad Mason, Brian Reagin and Anthony Carter.
Music was rendered by Jeffery Spell and Brad Mason.
In lieu of flowers, memorial contributions may be made to The Gideons, Georgia Baptist Children’s Home, or the charity of the donor’s choice.
To sign the online registry, visit wainrightparlor.com
Wainright Parlor Funeral Home was in charge.