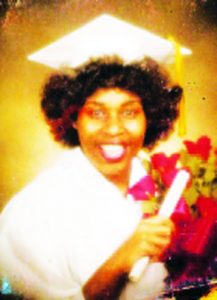 Memorial service for Mrs. Donna Marie Orr-Knuckles, 58, who died Oct. 5 at Augusta Medical Center in Augusta, was held at King Brothers Funeral Chapel in Hazlehurst Oct. 12 with Ministers Carlos and Michael Jones, officiating; special duet by Minister Michael and Mrs. Deanna Jones. Burial was private.
Mrs. Orr-Knuckles was born April 21, 1963, in Jacksonville, Fla., the only child of the late Butch Orr and Marion Martin Orr. She was educated at William Raines High School in Jacksonville, Fla. After graduating, she attended York College in York, Penn., majoring in the medical field.
She has been employed in the medical field for over 35 years, working at multiple hospitals and medical centers. Lastly, she was employed at Duval Medical Center in Jacksonville, Fla., and Bacon County Hospital in Alma. She was also a loving caregiver for many years.
From a child, Donna knew the Lord and she had a relationship with Him. Her hobbies were shopping and talking. She was also a seamstress.
Preceding her in death, along with her parents, is her grandmother, Geraldine Martin.
Survivors include son, Joshua Knuckles; fiancé of over 20 years, John Moore Jr. both of Lumber City; aunts, Mildred Pope of Jacksonville, Fla., and Marion Cobb of Allentown, Penn.; uncle, Jimmy Jones; cousins, other relatives, and friends.