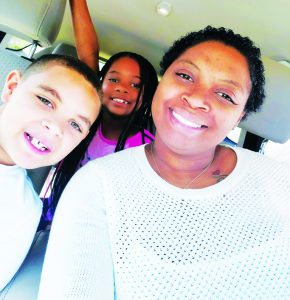 By
MARY ANN ANDERSON
Naomi Smith, who just turned 37, wants women to know that breast cancer has no specific age when it decides to show itself. She should know. She was only 35 when she was diagnosed with invasive ductal carcinoma HER2 positive breast cancer. It is, she said, a very aggressive cancer.
Unless a woman is high-risk for breast cancer, such as family history or inherited genes, the American Cancer Society recommends that mammogram cancer screening begin at age 40.
“But it doesn’t have an age to it,” said the young and vivacious Smith. “Listen to your body. Your body tells you when something is wrong, no matter your age.”
Diagnosis
Smith, the mother of two—son Stephen is 10 and daughter Mia is 6—already had fibrocystic breasts, a noncancerous and quite common condition where the breasts are dense or lumpy and which experts suspect is triggered by reproductive hormones, especially estrogen. But then the year before she was diagnosed with cancer, Smith’s breasts had begun hurting, and then headaches followed. She went to Bonnie Pittman, a family nurse practitioner with Jeff Davis Family Medical Group, and told her that her breasts were “hurting really, really bad.”
Pittman had given her an order for a mammogram, but because at the time Jeff Davis Hospital, where Smith has worked as an x-ray technician for many years, was busy undergoing accreditation, she held off getting it done. Finally a month after getting the order, she walked the few yards from x-ray to the mammogram room, where Stephanie Harrell, the hospital’s longtime x-ray and mammogram technician, performed the procedure. Almost as soon as the x-rays were in the hands of the radiologist, abnormalities showed up, and an ultrasound was ordered.
When Harrell returned to x-ray with the results, Smith said she saw her push her boss out of earshot so that she couldn’t overhear what she was saying.
“That’s when I knew something was wrong,” Smith said. “About that same time, the phone rang, and it was Bonnie. She said that she had the report.”
Smith huddled in the corner of the x-ray room to pull up the films and look at them as she spoke with Pittman on the phone. Pittman told her the results put her in category 5 for breast cancer, which is not the same as cancer stages but instead meaning the area was highly suspicious. Smith, her voice cracking at the memory, said she immediately fell apart. The first thing she did was call her sister-in-law Terri Smith, the wife of Smith’s late brother, Rodney who died this past June, and with whom she is close, and who told her to stay calm, a difficult task at best.
“I finished working that day,” said Smith. “I didn’t leave. I had my little moments, and I would start crying, but I pulled myself together and finished doing my job. All I could think about was my kids. I didn’t say anything to them about it because I had to go the next day to get a biopsy. But they could tell something was wrong when I picked them up.”
That was December of 2019, and after the biopsy, Smith’s breast cancer was confirmed. She remembers clearly how she felt, “At that moment when someone tells you that you have breast cancer, you feel that it’s a death sentence. In my mind, I thought I would die.”
Treatment
Two days before Christmas, she had surgery at Coffee Regional Hospital in Douglas under Dr. Chester Royals. When the results came back, the cancer was graded as Stage 1, and it hadn’t spread since it was caught early.
“Anytime you hear the word cancer, you always think that people never make it back from that, but you do,” she said. “I prayed, and prayed, and prayed. I never prayed so much in my life. A sense of peace was over me. I was at peace with it. I just remained positive, and I just kept pushing because I knew I had to live for my kids. They were my main focus. I just kept having faith in God that He was going to heal me and bring me through, and He did just that.”
Smith said her doctor, Eric Anderson of Douglas, spent more than two hours going over her treatment options. He ordered six rounds of chemotherapy in Douglas, every 21 days, and then to Vidalia every day except weekends for radiation.
Right now, Smith’s prognosis is good. She’s clear of cancer as of the moment, but she still has to return to Anderson’s office every four weeks for bloodwork. She’ll do that for a year. Next year, she said, provided she remains clear, she won’t have to go as often. Since her cancer was aggressive, she knows that it could return at any time but remains upbeat.
“It’s a big deal when you have cancer,” she concluded. “You never know what to expect.”
Support
Smith, the daughter of Gussie and Hozell Smith, both of whom have passed away, has in addition to her brother Rodney, twin brothers Donathan and Jonathan, and a half-brother, Rico McKever. While her family was supportive, she found that she depended, too, upon her network of friends and colleagues at Jeff Davis Hospital, many of whom took her to doctor’s appointments and surgical consultations.
“They were awesome,” she said simply.
In looking back, she didn’t feel a lump, only the uncomfortable pain in her breasts. Anderson told her that if she hadn’t had the mammogram when she did, it wouldn’t have been found until a later stage.
“I just thank God that He had a hand in it,” Smith said. “I knew everything would be okay. You never feel that when you’re that young, that you will go through anything like that. It just made me a stronger person, and I know that I can get through anything.”