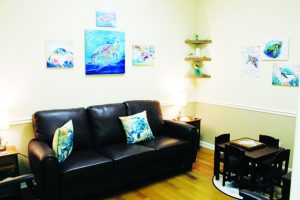 Kelly Spell knows a thing or two about comforting people in crisis.
After retiring from a 30-year career with the Georgia Department of Juvenile Justice (DJJ), Spell joined the District Attorney’s Office for the Brunswick Judicial Circuit, serving in its Appling and Jeff Davis counties’ office in Baxley as a victim advocate.
“When I got close to retirement, I was looking for a second career, because I started with DJJ right after college,” she said. “Working as a victim advocate for the DA’s office was a perfect fit.”
As part of her job, Spell guides the victims and witnesses of crimes through the judicial process – a journey that can often be painful. In the past, the difficult conversations and tender moments were often held in stark conference rooms under harsh fluorescent lights. But not anymore.
Newly minted District Attorney Keith Higgins, who assumed the role in January, has made it a priority to give victims and witnesses a comfortable place in his offices to feel at home and navigate the challenges of the judicial system.
Each office of the District Attorney in the Brunswick Judicial Circuit now has a Victim Advocacy Room—soothing spaces for the DA’s staff to converse with victims and witnesses away from the ringing phones and stern lights of conference rooms and offices.
Spell in Baxley was the first to open her room to victims and witnesses, complete with games and plush animals for children and cozy seating for adults.
“Each office chose a theme for their Victim Advocacy Rooms,” explained Spell. “I chose ‘The Refuge’ and decorated it with beach décor and sea turtles for a number of reasons: One, the life of a sea turtle is very hard. They travel a long way from the time they hatch to adulthood, and it can be a difficult journey. Being a victim of crime can be like that, but we have to remember the ocean is in front of us. Sea turtles don’t rush — they take their time and forge their own path.”
Spell’s “Refuge” room is complete with soft, incandescent lighting, a couch, relaxing chairs, toys and games for children, and snacks, much of which has been donated by local service organizations and charities.
“Court can be a very long day, especially for children, so we also have a ‘go-bag’ with things like crayons and coloring books,” said Spell. “I feel really good about it. I’ve been doing this for five years, and I’ve had experiences with some victims in tense and stressful situations. In this room, ‘The Refuge,’ victims can feel protected.”
Each of the DA’s four offices will have a Victim Advocacy Room, all with donations supplied by civic organizations.
Items for the rooms were donated by The Rotary Club of Brunswick, The Rotary Club of St. Simons Island, The Rotary Club of Jesup, The Rotary Club of Camden, The Rotary Club of the Golden Isles, The Rotary Club of Jekyll Island, The Rotary Club of Kings Bay, The Exchange Club of Brunswick, Georgia PORCH, Troy University and the Golden Isles Republican Women’s Club.
Anyone wishing to make a donation may contact Yolanda Richardson, Director of the Victim-Witness Assistance Program, at 912-554-7229 or yrichardson@pacga.org.
The District Attorney for the Brunswick Judicial Circuit serves Appling, Camden, Glynn, Jeff Davis and Wayne counties. 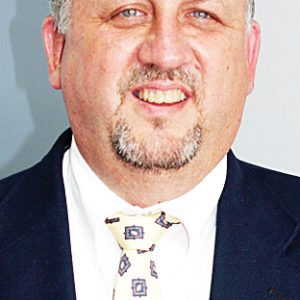