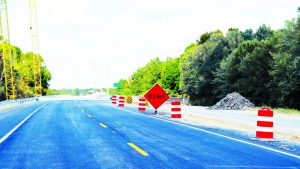 The new bridge over the Altamaha is now open 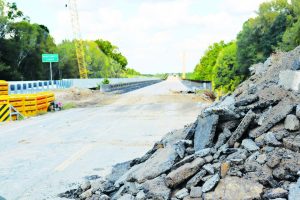 With last Friday’s opening of the new Altamaha River Bridge at Towns Bluff, destruction is slated to begin on the span it replaces — the Neal Lee Gillis Bridge, known locally as the Uvalda Bridge, constructed in 1952. Neal Lee Gillis was the father of long-time State Highway Board Commissioner Jim Lee Gillis of Soperton.
It was Jim Gillis who promised Jeff Davis County officials in 1949 that the bridge, previously promised by Georgia Governor M.E. (Melvin Ernest) Thompson in 1948, would be built, connecting Hazlehurst to Vidalia and other towns across the Altamaha River.
In proposing the bridge, Gov. Thompson said the old bridge at Piney Bluff would be dismantled and brought by barge to Towns Bluff and reassembled. It would cut the distance to Vidalia into approximately one half.
Jeff Davis County Senatorial candidate Lawton Ursrey and Representative candidate George N. Yarbrough made the bridge a major plank in their 1948 campaigns.
By August, 1948, engineers had been working at the Towns Bluff site for more than a month, making surveys and taking soundings for the concrete piers.
In September, 1949, Jim Gillis told Jeff Davis County Ordinary C.C. Harrison that the bridge is “definite in the near future.”
But in November, 1949, the Ledger received a notice from the U.S. Army Corps of Engineers asking that the commencing of building the bridge, 135.3 miles above the mouth of the Altamaha River, be extended to Sept. 21, 1950. The location and plans had been approved by the Assistant Secretary of the Army on Sept. 21, 1948.
By April, 1952, the bridge was finally under construction and the State began asking for bids on paving and widening the Hazlehurst-Uvalda highway. By September, the bridge was being painted and cars were beginning to cross it. By October, the road from Hazlehurst to Uvalda was expected to be open to the public in four weeks.
The nearly half-mile long Neal Lee Gillis Bridge is technologically significant as an early and complex example of the long-span continuous steel stringer bridge with riveted splice plates that became an important state standard design in the post-World War II era.
The most significant feature of the 41-span bridge is the one, 3-span, continuous steel stringer span of 111’-150’-111’ supported on two-column concrete bent piers.
The bridge is considered an impressive example of bridge engineering, as its design required involved calculations, and it is one of the largest surviving bridges done under State Bridge Engineer Clarence N. Crocker (1894-1995), who served in that capacity for 23 years.
The bridge is eligible for inclusion in the National Register of Historic Places.