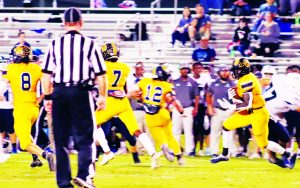 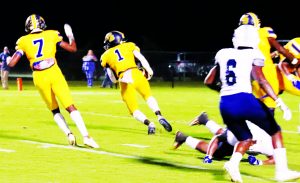 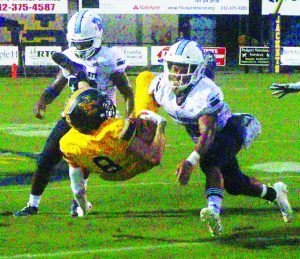 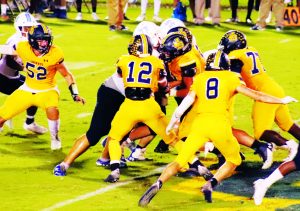 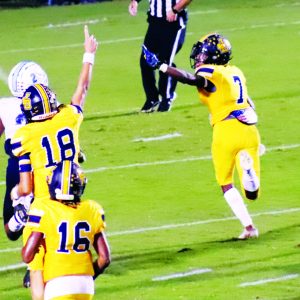 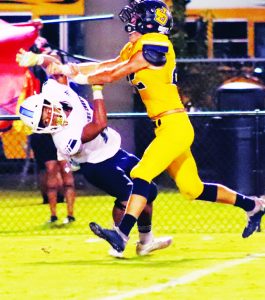 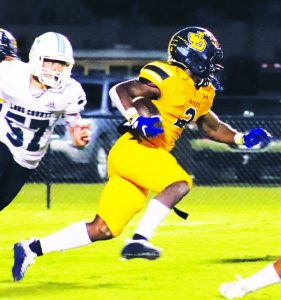 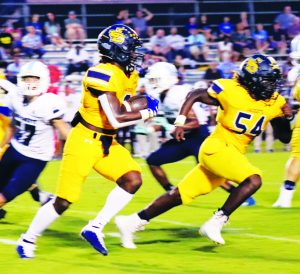 Jeff Davis High’s 34-12 win over Long County Friday night marked the team’s fourth win playing without a full complement of players as COVID and injuries have sideline various players in each game. With the forfeit win over Atkinson County, the Yellow Jackets are now 5-0 and ranked as high as No. 6 in Georgia’s Class AA.
The JD defense once again was dominant in Friday’s homecoming victory over the Blue Tide.
Both teams started slowly in the opening quarter until, on the Jackets’ second possession of the evening, Aahiyus Allen darted through a huge hole for a 12-yd. pickup. But soon after, a Long defender scooped up a Jacket fumble and raced 44 yards untouched for a Blue Tide touchdown. The 2-pt. conversion try failed but Long had a 6-0 lead.
The Jackets wasted no time getting the score back. Starting at the 35, Allen had another 12-yd. pickup. After a holding call, two plays later, the Jackets faced 3rd-and-17 at their own 40. On an end around reverse, Michael Dotson swept 60 yards untouched into the Long end zone as William Cravey threw the block that sprung Dotson loose for the score. The P.A.T. kick sailed to the right and the score remained 6-6.
On the ensuing kickoff, the Jackets swarmed down the field and stopped the return at the Long 17.
After a 3-and-out, the Jackets started their next scoring drive at their own 22 early in the second quarter. It took them a dozen plays. Big gainers in the drive were a 9-yd., tackle breaking run by Kiyon Dotson, a 12-yd. run behind excellent blocking by Allen, a 16-yd. keeper by quarterback Tyson Alls, a 13-yd. keeper by Alls on the very next play, a 10-yd. run by Hunt to the two, and Allen’s 2-yd. scoring run. Angel Mendez’s kick made it 13-6.
On their next possession, Long put together a short drive, going from their own 23 to the Yellow Jacket 41. But two plays later, on the final play of the first half, the Long quarterback overthrew his receiver and Michael Dotson leaped high in the air to pick off the aerial at the 12. He returned the ball down the right sidelines, cut back across the field and raced down the left sidelines all the way for the score with a quintet of yellow jerseys escorting him into the end zone.
Mendez booted the extra point and the Jackets had a 20-6 halftime lead.
After the second half kickoff, it took Jeff Davis only three plays to score again.
Kiyon Dotson burst up the middle for 23 yards on the first play, Alls picked up 16 on a double pass from him to C.J. Parker and back, and Kirese Hunt scored from the 13 with Allen throwing the block that cleared the way. Mendez kicked the point after and it was 27-6.
The Jackets’ next possession started at their 21. After a first down, a long Allen run was nullified by a flag and the Jackets were back at the 24 with a 1st-and-19.
Facing a 4th-and-3 at the 39, the Jackets’ Kade Harpe retreated to punt but Coach Lance Helton called a timeout. The coaches had seen something in the Long lineup that made them reconsider.
Harpe again retreated to punt but this time threw to a wide open Parker at the Long 49. Parker took in the pass and weaved his way into the end zone for another JD score. But a penalty nullified the play and the Jackets had to punt the ball away.
The Jackets’ next scoring drive started at the JD 49 and took four plays. Allen picked up four, Kiyon Dotson got six and a first down, Allen rambled 24 on a tackle breaking run as he carried a couple of tacklers down the field, and Kiyon Dotson covered the final 17 yards through a giant hole up the middle. He was stopped at the five on the play but he fought his way the final steps into the end zone, carrying tacklers with him. Mendez’s extra point made it 34-6.
The Tide put together a drive to inside the Jacket 20 on their next possession but Tre Chandler pounced on a fumble to end the drive at the 16. A couple of plays later, Long intercepted a pass and returned the ball to the Jacket 13.
Long scored on the first play to cut the score to 34-12. They went for two but failed.
There was only enough time left for the kickoff as Jeff Davis came away with the win.